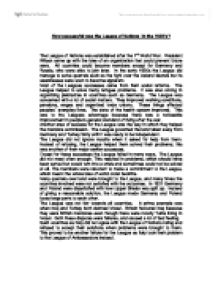 How successful was the League of Nations in the 1920's?

How successful was the League of Nations in the 1920's? The League of Nations was established after the 1st World War. President Wilson came up with the idea of an organization that could prevent future wars. All countries could become members except for Germany and Russia, who were able to join later. In the early 1920s the League did manage to solve quarrels such as the fight over the Aaland Islands but its weaknesses were soon to become apparent. Most of the Leagues successes came from their social reforms. The League helped to solve many refugee problems. It was also strong in organizing plebiscites in countries such as Germany. The League was concerned with a lot of social matters. They improved working conditions, pensions, wages and organized trade unions. These things affected peoples` everyday lives. ...read more.

In 1921 Germany and Poland were dissatisfied with how Upper Silesia was split up. Instead of giving a reasonable solution, the League made Germany and Poland loose large parts to each other. The League was not fair towards all countries. A prime example was when Iraq and Turkey both claimed Mosul. Britain favoured Iraq because they were British mandates even though there were mostly Turks living in Mosul. Both these disputes were failures, and caused a lot of bad feeling. Such countries as Italy did not agree with the League of Nations ruling and refused to accept their solutions when problems were brought to them. This proved to be another failure for the League as Italy took their problem to the League of Ambassadors instead. The league had wanted their members to feel a greater sense of security. ...read more.

This was due to poor management and structure. The Leagues members did not meet often enough and because every decision had to be unanimous, solutions to problems were slow and not affective. This meant many countries that brought their problems to the League were dissatisfied with the outcome. Trade sanctions proved not to work either because they could not be enforced or powerful countries like America continued to trade. This resulted in some countries refusing to listen to the League and took matters into their own hands. Poland did this when they were asked to leave Vilna. The poorness and lack of decision-making caused countries to suffer and rebel against the League. The idea of the League of Nations was to stop the outbreak of war and bring peace to all countries, but instead it seemed to create more problems from the many dissatisfied members. The idea of the League was a good one, but was not thought through and seemed very idealistic at the time. ...read more.