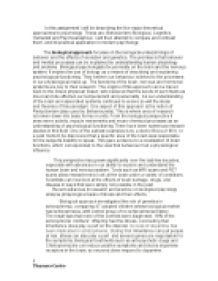 Compare and Contrast the five main perspectives in psychology

﻿In this assignment I will be describing the five major theoretical approaches to psychology. These are; Behaviorism, Biological, Cognitive, Humanist and Psychoanalytical. I will then attempt to compare and contrast them, and its practical application in modern psychology. The biological approach focuses on the biological underpinnings of behavior and the effects of evolution and genetics. The premise is that behavior and mental processes can be explained by understanding human physiology and anatomy. Biological psychologists focus mostly on the brain and the nervous system. It implies the use of biology as a means of describing and explaining psychological functioning. They believe our behaviour is linked to the processes in our physiological make-up. The functions of the brain, nervous and hormonal systems are key to their research. The origins of this approach can be traced back to the Greek physician Galen, who believed that the levels of such fluids as blood and bile affected our temperament and personality. As our understanding of the brain and associated systems continues to evolve so will the ideas and theories of this paradigm. One aspect of this approach is the notion of Reductionism (also used by Behaviourists). This is where area of research is broken down into basic forms or units. From the biological perspective it sees nerve activity, muscle movements and neuro-chemical processes as an understanding of psychological functioning. There have been numerous research studies in this field. One of the earliest examples is by a doctor Broca (1861). In a post mortem he discovered that a specific area of the brain was responsible for the subjects inability to speak. This gave evidence to a localisation of brain functions, which corresponded to the view that behaviour had a physiological influence. This perspective has grown significantly over the last few decades, especially with advances in our ability to explore and understand the human brain and nervous system. Tools such as MRI scans and PET scans allow researchers to look at the brain under a variety of conditions. ...read more.

Piaget (1896-1980) who studied cognitive development in neo nates through to adolescence produced one of the most famous theories in this area. He saw cognitive development having 4 key stages. Firstly the sensorimotor stage (0-2), the baby has an innate reflex to situations, which gives the basis for future development. These are called schemas and are like plans of appropriate action in certain situations. The baby has no concept of anything which is out of sight e.g. it doesn't exist; he referred to this as object permanence. Second is the pre-operational stage (2-7). This involves conservation, which is the ability to perceive differences in appearance and size. Thirdly, the concrete operational stage (7-11). The child's emotions become more developed and become less egocentric. This is referred to as decentration; a more empathic approach is taken. Last is the formal operational stage where the child develops abstract thought and is able to demonstrate deductive reasoning. This theory is widely regarded and used to form the basis for modern child psychology. Cognitive psychology explains schizophrenia as being a faulty information processing and that Schizophrenics fail to monitor their own thoughts. Voice-hearers can be helped to being voices under their control. Psychotherapy ? controlling thought processes instead of uncovering unconscious (Bentall).Patients are told that the voice represent part of their thought processes and encouraged to develop strategies to protect themselves against the voices. Relaxation techniques, talking to others also were used as in cognitive treatments to Schizophrenia. Cognitive psychologists are divided on the issue of free will. Some believe people can choose their actions, others are more deterministic and suggest that we can no more decide on our own behaviour than a computer can. In the nature-nurture debate, cognitive psychologists take an interactionist position, believing that our behaviour is influenced by learning and experience (nurture) but also by our brains? innate capacities as information processors (nature). The approach is basically nomological in outlook, as its focus is on establishing the information processes that are common to all people. ...read more.

A person?s behaviour is determined by their unconscious motives which are shaped by their biological drives and their early experiences, making this a deterministic approach. With reference to the nature-nurture debate, the psychodynamic approach takes an interactionist position: it agrees that we are driven by innate, biological instincts (nature) but also maintains that the expression of these is heavily modified by our upbringing (nurture). The psychodynamic approach also occupies the middle ground in the debate between nomological and ideographic approaches to psychology. Whilst Freud argued that human behaviour is governed by universal processes that apply to everyone (the psyche, the psychosexual stages), reflecting a nomological understanding, psychodynamic psychologists agree that the exact ways in which these processes manifest themselves in the individual is unique in every case. Their case-study approach to research reflects this uniqueness and exemplifies an ideographic way of studying people. However, because the psychodynamic approach generally explains complex behaviours as manifestations of more primitive biological drives, it is widely regarded as a reductionist approach to psychology rather than a holistic one. Psychodynamic approach is used in modern psychology to treat anxiety, the aim is not the ?cure? the patient?s psychological problems, in the same way that the medical profession might hoe to find a cure for AIDS. Rather, the aim is to enable the person to cope better with inner emotional conflicts (between the id, ego & superego) that are causing anxiety. The purpose of therapy is to uncover unconscious conflicts & anxieties that have been repressed & work through these. Psychology has a bearing on all of us in every day life from birth to death whether conscious or unconscious. Our understanding and interpretation depends largely on the society in which we live and our cultural and religious beliefs. It is therefore a subject where right and wrong is very difficult to determine. Because of this and the fact that we still can not categorically state which of the various perspectives is closer to the truth, psychology is an ever changing and fascinating subject and each paradigm has something unique to contribute to our understanding. ...read more.

The writer has described the different psychological approaches in some detail and appears to have some understanding of the differences. However, it would appear that some of the work has been plagiarised. The writing should be in the writer's own words throughout the essay so that it is clear that they have read around the subject and understood it.

The writer needs to really get the 'gist' of what each theory is about and then compare and contrast it with the others. At times the writer does not appear to do this. Simple and clear explanations are important, picking out the salient points. There is a great deal of content in this essay so if the comments are taken on board then the score could be improved significantly.