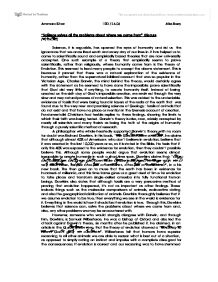 Science Solves All The Problems About Where We Come From Discuss

"Science solves all the problems about where we come from" Discuss (10 marks) Science, it is arguable, has opened the eyes of humanity and rid us the ignorance that we once lived each and every day of our lives in. it has helped us to come to scientifically sound and empirically based theories that are now universally accepted. One such example of a theory that empirically seems to prove scientifically, rather than religiously, where humanity came from is the theory of Evolution. This seemed to lead many people to accept the above statement. This is because it proved that there was a natural explanation of the existence of humanity, rather than the supernatural biblical account that was so popular in the Victorian Age. Charles Darwin, the mind behind the theory, would certainly agree with the statement as he seemed to have done the impossible: prove scientifically that God did very little, if anything, to create humanity itself. Instead of being created on the sixth day of God's impossible creation, we evolved through the very slow and very natural process of natural selection. This was added to the undeniable evidence of fossils that were being found in layers of the rocks of the earth that was found due to the very new and promising science of Geology: fossils of animals that do not exist and that have no place or mention in the Genesis account of creation. ...read more.

Morris, using the original, Hebrew version of the Bible, deduced that the word used in Genesis 1 for "day" was a word that always means a "24-hour period". The word used for "era", he stated, is a completely different one. "There should be no uncertainty whatever that God intended the account to say that the creation of all things had taken place in six literal days". Therefore, Morris would feel that science, in no way, can prove everything and solve all the problems about where we come from. Instead of using science to question ideas that the Bible gives, science should be judged against the Bible as to whether it is correct or not. This is because the Bible is, overall, the word of God, so it must stand tall above all other forms of "proof" that claim they know the truth of all things about humanity. God can never be mistaken as God is completely perfect, and, therefore, the Bible, Genesis included, is correct, right the way until the end. In reference to the fossils found by geologists, who would also claim have no place or mention in the creation story, Morris would beg to differ. He feels that he has found passages in the Bible that seem to refer to a diplodocus (a large, four-legged, long necked animal with a long whip-like tail) ...read more.

Without the Big Bang, humanity would never have come into being. But even if the Big Bang would have being by some external, omnipotent force, it would have been highly unlikely that the Universe would have sustained itself without a sustainer. The Second Law of Thermodynamics, or the scientific concept of entropy, states that "in any natural process there exists an inherent tendency towards the dissipation of useful energy". This basically means that when left alone, order tends to revert back to chaos. If this were so then why isn't the world full of chaos, but order instead? Why does evolution lead to progression and not regression? I feel that science can explain the processes by which the universe and humanity came into being, but I don't think that it can thoroughly explain, using only natural and empirical evidence, how and, more importantly, why these processes came into being. It's all well saying that the Big Bang just happened, but to me, I feel that if the whole Universe was just an accident with no intent or purpose, then none of humanity really has a reason or purpose for living, other than being the result of an accident. Or, perhaps, the universe is just "brute fact" as Bertrand Russell stated, and we just have to accept this. Nevertheless, although I feel that people can have different views on the world, for me, the universe cannot go without explanation as to why it exists. ?? ?? ?? ?? Ammara Khan 12D / L6.06 Miss Berry ...read more.