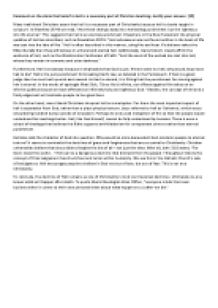 Comment on the claim that belief in hell is a necessary part of Christian teaching. Justify your answer.

Transfer-Encoding: chunked ﻿Comment on the claim that belief in hell is a necessary part of Christian teaching. Justify your answer. [15] Many traditional Christians assert that hell is a necessary part of Christianity because hell is clearly taught in scripture. In Matthew 25:46 we read, ?And these shall go away into everlasting punishment: but the righteous into life eternal.? This suggests that hell is an eternal punishment. Elsewhere in the New Testament the physical qualities of hell are described, such as Revelation 20:15: ?And whosoever was not found written in the book of life was cast into the lake of fire.? Hell is often described in this manner, using fire and heat. ...read more.

Hell is the just punishment for breaking God?s law, as detailed in the Pentateuch. If God is a good judge then he must both punish and reward. As God is eternal, it is fitting that the punishment for sinning against him is eternal. In the words of apologist Matt Slick, ?Since He is infinite, our offense against Him takes on an infinite quality because we have offended an infinitely holy and righteous God.? Besides, the concept of hell and a final judgement will motivate people to live good lives. On the other hand, more liberal Christians interpret hell as a metaphor. For them the most important aspect of hell is separation from God, rather than a place physical torture. ...read more.

Christian universalists believe that Jesus died to forgive the sins of all ? not just the elect. After all, John 3:16 states, ?For God s loved the world?? Hell can be a dangerous doctrine that distracts from the gospel. Throughout history the concept of Final Judgement has struck fear and terror within humanity. We see this in the Catholic Church?s sale of indulgences. Hell encourages people to believe in God not out of love, but out of fear. This is not true Christianity. To conclude, the doctrine of Hell remains as one of Christianity?s most controversial doctrines. Ultimately no-one knows what will happen after death. To quote liberal theologian Allen Clifton, ?everyone minds their own business when it comes to their own personal views about what happens to us after we die.? ...read more.