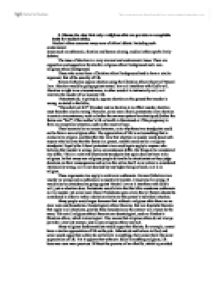 Discuss the view that only a religious ethic can provide an acceptable basis for medical ethics.

3. Discuss the view that only a religious ethic can provide an acceptable basis for medical ethics. Medical ethics concerns many areas of ethical debate. Including such controversial issues such as euthanasia, abortion and human cloning, medical ethics sparks lively debates. The issue of abortion is a very relevant and controversial issue. There are opposition and supporters from both a religious ethical background and a non-religious ethical background. Those who come from a Christian ethical background tend to have a similar argument, that of the sanctity of life. Roman Catholics oppose abortion using the Christian ethical theory of Natural Law. Abortion would be going against natural law as it interferes with God's will. Abortion is right in no circumstances, in other words it is intrinsically evil, as it involves the murder of an innocent life. Protestants do, in principle, oppose abortion on the ground that murder is wrong, as stated in the bible; "Thou shalt not kill" (Exodus) and as abortion is in effect murder, abortion must therefore also be wrong. ...read more.

These arguments also apply in relation to euthanasia. Roman Catholics view murder as wrong and as euthanasia is essentially murder, it must also be wrong. It would also be considered as going against Natural Law as it interferes with God's will, just as abortion does. Protestants would claim that the bible condemns euthanasia as it is murder, yet come more liberal Protestants again claim that all factors should be considered in order to make a decision relative to that person's individual situation. Many people would argue however that without a religious ethic there are no clear rules and boundaries. Deontological ethical theories, that are absolutist theories that apply in all situations, provide these boundaries as the answer will always be the same. Yet not all religious ethical theories are deontological, such as Fletcher's Situation ethics, which is teleological. This means that religious ethics do not always provide a clear cut answer, just as non-religious ethics may not. ...read more.

Although some Christian ethics will provide a stable answer for every situation, an answer that will never change and therefore will have clear-cut boundaries, not every person in the world will ever be of the same religion, and therefore it cannot be universal. Therefore a non-religious ethic which everyone could agree on seems more acceptable, such as one that allows situations to be considered, because therefore a religious ethic could be used in certain circumstances if the people involved would like to do so, as that happens to be their own "situation"; similarly if someone does not want to apply a religious ethical theory then they are not obliged to do so, because again this option would apply to their situation. Therefore situationist ethics that are not based on religion can be made universal, allowing religious ethics to be applied or not according to the wishes of the people involved and this seems to me to be the only acceptable basis for medical ethics, an ethic that will allow for everyone's personal beliefs. ...read more.