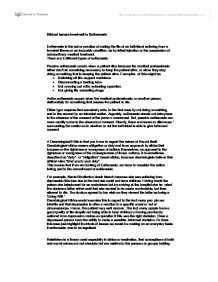 Ethical Issues Involved In The Legislation of Euthanasia?

Ethical Issues involved in Euthanasia Euthanasia is the act or practice of ending the life of an individual suffering from a terminal illness or an incurable condition, as by lethal injection or the suspension of extraordinary medical treatment. There are 2 different types of euthanasia. Passive euthanasia occurs when a patient dies because the medical professionals either don't do something necessary to keep the patient alive, or when they stop doing something that is keeping the patient alive. Examples of this might be; * Switching off life-support machines. * Disconnecting a feeding tube. * Not carrying out a life-extending operation. * Not giving life-extending drugs. Active euthanasia occurs when the medical professionals, or another person, deliberately do something that causes the patient to die. Either type requires that somebody acts. In the first case by not doing something, and in the second by an intended action. Arguably, euthanasia should not take place in the absence of the consent of the person concerned. But, passive euthanasia can more readily occur in the absence of consent. Clearly, there are issues or dilemmas' surrounding the matter as to whether or not the individual is able to give informed consent. ...read more.

Particularly , pressure could be bought on vulnerable people to achieve an outcome that they themselves may not desire. Others would take the view that euthanasia can alleviate suffering. People have the right to determine their own destiny and die as and when they want to. Many people think that each person has the right to control his or her body and life and so should be able to determine at what time, in what way and by whose hand he or she will die. Behind this lies the idea that human beings should be as free as possible and that unnecessary restraints on human rights are a bad thing. And behind that lies the idea that human beings are independent biological entities, with the right to take and carry out decisions about themselves, providing the greater good of society doesn't prohibit this. Allied to this is a firm belief that death is the end. Another ethical issue regarding euthanasia is, is death such a bad thing? If death is not a bad thing then many of the objections to euthanasia vanish. Once we get past the idea that death is a bad thing, we are able to consider whether death may actually sometimes be a good thing. ...read more.

I would hope to be in old age by then and would assume most people would understand. Also I believe, if I'm not mistaken, the fight against Euthanasia is financed by the medical industry who stand to make alot more money keeping you alive then letting you pass on. Oddly enough the money that lobbied for euthanasia came not only from fundamental christain groups, but oddly enough from insurance companies... Despite this I think euthanasia has to many complications to allow it be to be legalised. This is due to factors such as, you can not distinguish a mentally ill person from a sane person if they both came into a clinic and said 'I want to die.' Also, someone who comes into a clinic and says "I want to die" will be considered crazy either way. It is for reasons like this euthanasia is so hard to regulate as finding out if the person is being taken advantage of, if they are genuinely ill or just fed up or if they are being forced into it would take too long and many people would argue that there are a lot more important issues going on in today's society. ?? ?? ?? ?? ...read more.