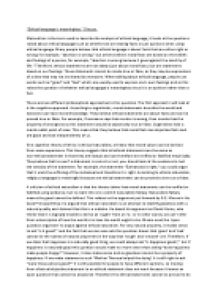 Transfer-Encoding: chunked ﻿?Ethical language is meaningless.? Discuss. Meta-ethics is the term used to describe the analysis of ethical language; it looks at the questions raised about ethical language such as whether we are stating facts or just opinions when using ethical language. Many people believe that ethical language is about facts that are either right or wrong, for example, ?abortion is wrong,? but others believe moral facts are based on the beliefs and feelings of a person, for example, ?abortion is wrong because it goes against the sanctity of life.? Therefore, ethical statements are not always just about moral facts, but are statements based on our feelings. These statements cannot be made true or false, as they may be expressions of a view that may not be shared by everyone. When talking about ethical language, people use words such as ?good? and ?bad? which are usually used to express one?s own feelings and so this raises the question of whether ethical language is meaningless since it is an opinion rather than a fact. There are two different philosophical approaches to this question. The first approach I will look at is the cognitive approach. According to cognitivists, moral statements describe the world and everyone can have moral knowledge. ...read more.

He listed seven classes of prima facie duties: duties of fidelity, reparation, gratitude, justice, beneficence, self-improvement, non-maleficence. Ross says that when these duties conflict, we must follow the one we think it right in the situation, and sometimes one duty will have to give way to another. The duty a person thinks is right in a situation will depend on a person?s moral maturity. According to intuition, religious language is meaningful because people have certain intuitions about right and wrong. The problem with intuitionism is that it claims that we know what is good by intuition and not by empirical evidence but this is not proved by Moore ? he says you either agree with him or have not thought about it properly. However, it would seem that if the naturalistic fallacy shows that you cannot conclude value judgements from natural facts by means of evidence obtained through the senses, then the idea of ?non-natural? facts and a special ?intuition? does not make sense. Some philosophers say that out emotions and practical wisdom gave us this intuitive knowledge. Also, we cannot be sure that intuitions are correct since people may come to different conclusions, whether they use intuition or reason to come to their decisions. ...read more.

Hare ? is prescriptivism. He tried to show that the role of ethical statements is to say what ought to be done and such prescriptions are moral because they are universal. Hare argues that other theories, such as emotivism try to explain what we are doing when we make ethical judgements. Hare said that although these approaches are useful, universal prescriptivism is superior. It says ?you ought to do this? and so everyone should do the same in similar situations. Ethical statements are prescriptive, which means they do not state facts and are not true or false, but they are imperatives that express our will or wishes. The word ?good? always has a descriptive meaning. If we use the word ?good? in a moral sense, again we are using a set of standards that apply to a person or an action and we commend that person or action. This means that the word ?good? also has a good has a prescriptivism meaning, and when we use words with an ethical meaning we use them prescriptively. Prescriptivism suggests that, to achieve consistency in moral judgements, when we say that someone else ought to do something, we ought to do it as well. So according to prescriptivism, ethical language is meaningful. A problem with prescriptivism is that if moral judgements are founded on prescriptions, this still does not mean that there is a valid reason for following one person?s prescriptions rather than another?s. ...read more.