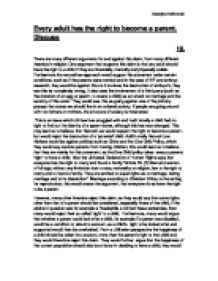 Every adult has the right to become a parent. Discuss

Every adult has the right to become a parent. Discuss 10. There are many different arguments for and against this claim, from many different theorists in religion. One argument that supports this claim is that any adult should have the right to a child if they are financially, mentally and physically stable. Furthermore the natural law approach would support this statement under certain conditions, such as if the parents were married and in the case of IVF and embryo research, they would be against this as it involves the destruction of embryo's, they see this as completely wrong. It also sees the involvement of a third party (such as the donation of an egg or sperm, to create a child) as an attack on marriage and the sanctity of this union. ...read more.

Also the Universal Declaration of Human Rights says that everyone has the right to marry and found a family "Article 16. (1) Men and women of full age, without any limitation due to race, nationality or religion, have the right to marry and to found a family. They are entitled to equal rights as to marriage, during marriage and at its dissolution". Marriage according to Christian Ethics, is the setting for reproduction, this would create the argument, that everyone does have the right to be a parent. However, many other theorists reject this claim, as they would say that some rights other than that of a parent should be considered, especially those of the child, if the adults in question was for example a Paedophile and had these tendencies, then many would reject their so called 'right' to a child. ...read more.

in reference to Kant's Practical Imperative, which would reject this claim as he would argue that we should treat others with respect and dignity i.e. not treating them instrumentally "that which constitutes the condition under which alone anything can be an end in itself, this has not merely relative worth, that is, value, but an intrinsic worth, that is, dignity". Furthermore the Christian perspective, that a child is a blessing and gift from God (rather than a right), would further reject this claim. In conclusion, I believe the statement is wrong, as in my belief a child is a gift and not a right. If you bring a child into the world, you have a moral responsibility to care and look after the child and so to say a child is a right would take away this responsibility. ?? ?? ?? ?? Georgina McDonald ...read more.