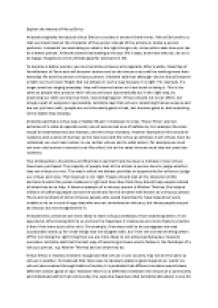 Explain the theory of Virtue Ethics

Transfer-Encoding: chunked ﻿Explain the theory of Virtue Ethics Aristotle originally introduced virtue Ethics to society in ancient Greek times. Virtue Ethics tells us that we should look at the character of the person instead of the actions or duties a person performs. Instead of concentrating on what is the right thing to do, virtue ethics asks how you can be a better person. Aristotle claims that leading a virtuous life is easy, and those who do, do so to be happy. Happiness is the ultimate goal for everyone in life. To become a better person, you must practice virtuous acts regularly. After a while, theseTop of FormBottom of Form acts will become routine and so the virtuous acts will be nothing more than everyday life and the person a virtuous person. Aristotle said that although virtues should become a habit we must never forget that we behave in such a way because it is right. ...read more.

People should look at the character within and look at what the person believes is right and how they think they should help people instead of what they do to help. A famous example of a virtuous person is Mother Theresa. She helped millions of suffering people across the world and for this became well known as a virtuous person. There are hundreds of other virtuous people who would have liked to have helped but were unable to do so in such a huge way who are not considered as virtuous, but these people are just as virtuous but not recognised for it. Aristotle tells us that we are most likely to learn virtuous behaviour from watching others. If we experience others being kind to us and see the happiness it creates we are more likely to practice it then if we were just told to do it. For example, if we were told to be courageous we may occasionally stand up for small things that we disagree with, but if we see ...read more.

Everyone has different ideas of what happiness is and different things all make different people happy, and Aristotle called this feeling of all round wellbeing eudaimonia. Therefore, Virtue Ethics concentrates on what a person is then what a person does. Its aim is to achieve something, which people genuinely want rather than being based on arguably incoherent ideas about the after-life. It is a system, which can be easily applied and understood by all. It fits into a variety of philosophies, and religions, which both do and don?t include God. However, there are a few problems with Virtue Ethics. Ones of these which has been pointed out by MacIntyre is that although a virtue is the ?golden mean? between two vices it cannot be applied to all virtues. Virtues such as promise keeping, loyalty, and compassion do not fall between any two vices and so Aristotle?s theory of this does not really work. Another problem with this theory is that it is of little help to people faced with a moral dilemma. It does not help them make a decision like other theories such a natural law or utilitarianism. ...read more.