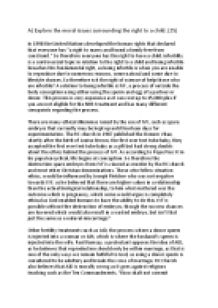 Explore the moral issues surrounding the right to a child.

ï»¿1. Explore the moral issues surrounding the right to a child. (25) In 1998 the United Nations developed the human rights that declared that everyone has “a right to marry and found a family free from constraint.” So therefore everyone has the right to have a child. Infertility is a controversial topic in relation to the right to a child and being infertile breaches this fundamental right, as being infertile is when you are unable to reproduce due to numerous reasons, some natural and some due to lifestyle choices. So therefore is it the right of science of help those who are infertile? A solution to being infertile is IVF, a process of outside the body conception using either using the sperm and egg of a partner or donor. This process is very expensive as it can cost up to £5,000 plus if you are not eligible for the NHS treatment and has many different viewpoints regarding the process. There are many ethical dilemmas raised by the use of IVF, such as spare embryos that currently may be kept up until fourteen days for experimentation. ...read more.

Natural Law has many issues with a right to a child through IVF, though they view it as primary precept to be able to reproduce though this clashes with the primary precept that we should protect innocent life, which in the situation of IVF, the innocent life of the embryo may be mistreated, as being property, experimented on or destroyed these all go against the precept of protecting innocent life. Natural law is an absolute theory that takes no account of the research benefits n embryos such as embryo stem cells that can be used to treat diseases or whether it leads to the happiness of an infertile couple having a child. It views the processes as wrong, as well the method of obtaining the sperm, as masturbation is viewed as a misuse of the genitalia. Though another moral issues raised by IVF, Is the concept of ?designer babies? created through the process of IVF which allows parents in some countries to select the gender of their child, as well as removing undesirable traits and adding ones that parents wants, this is genetic engineering of an embryo. ...read more.

Is it justified to kill so many potential lives to create one life? An ethical problem in modern society is that people use IVF to create an embryo that is a genetic match to a sibling that is dying or as a cure for their illness would be seen as unethical as the embryo is being treated as a means to a end which is unethical. Kantian ethics looks at the universalizability of IVF, if everyone were able to produce via IVF would we not be changing our natural way of reproduction? Is it ethical to change something so human? Allow us to live in society were we choose the gender or characteristics of our children. To conclude, IVF raises numerous ethical issues. Such as should it be free or is there an age limit for the treatment, does everyone really have a right to a child? Though it also pushes forward in human development by advancing medical understanding and overcoming genetic or natural problems, but will this lead to a perfect race where people who cant afford IVF may be less superior or will it create an equal race where everyone is a super baby of IVF. Many people around the disagree on religious grounds that a right to a child, is possibly a god given right and infertility is God?s will. ...read more.