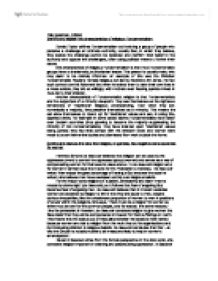 Polly Jackman, 12SAM Identify and explain two characteristics of religious Fundamentalism Donald Taylor defines Fundamentalism as involving a group of people who perceive a challenge an ultimate authority, usually God, in which they believe, they decide the challenge cannot be tolerated and reaffirm their belief in the authority and oppose the challengers, often using political means o further their cause. One characteristic of religious Fundamentalism is that most Fundamentalist groups have a charismatic, authoritarian leader. This person is usually male, who may claim to be divinely informed. An example of this was the Christian Fundamentalist People's Temple religious cult led by Reverend Jim Jones. He had such control over his followers that when he asked them to take their own lives in a mass suicide, they did so willingly, with mothers even feeding cyanide mixed in Kool-Aid to their children. Another characteristic of Fundamentalist religion is that Fundamentalists are the supporters of a minority viewpoint. They see themselves as the righteous remainders of 'traditional' religious understanding. Even when they are numerically a majority, they perceive themselves as a minority. This means the can allow themselves to 'stand up' for 'traditional' values and can, in doing this, oppress others. For example in some cases Islamic Fundamentalists have taken over Eastern countries (thus growing to become the majority suppressing the minority of non-Fundamentalists). ...read more.

Despite these views El Saadawi denies that the oppression of women is directly caused by religion in general. Female circumcision has been practised in a number of countries, not all of them Islamic, and authentic religious practices tend to be opposed to any such practices because '...if religion comes from God, how can it order man to cut off an organ created by Him as long as that organ is not diseased or deformed?'. El Saadawi states that religion became patriarchal by the misinterpretation of religious beliefs by men. A distortion El Saadawi cites is the Christian creation story. Here Eve is often portrayed as a temptress who created evil in the world, but was created from Adam's spare rib. However '...if we read the original story as described in the old Testament, it is easy for us to see clearly that Eve was gifted with knowledge, intelligence and superior mental capacities, whereas Adam was only one of her instruments, utilised by her to increase he knowledge and give shape to her creativity' (El Saadawi, 1980). El Saadawi believes that female oppression is not essentially due to religion but due to the patriarchal system that has long been dominant. She concludes that religion has played it's part, 'The great religion of the world uphold similar principles in so far as the submission of women to men is concerned...where the cause of women was concerned, they [religions] added a new load to their already heavy chain.' ...read more.

Religion is essentially a conservative force; it prohibits change so that even now when other structures in society are becoming more equalised, the church has done little to reverse or stop female emancipation. The very core of religions serve to oppress women. The basic teachings such as those the Koran and Bible have lines within them that are obviously s****t. For example, in the Koran: 'Men are in charge of women...hence good women are obedient.' In the Bible: 'Wives be subject to your husbands...for the husband is the head of the wife.' Everyday male orthodox Jews say 'Blessed art thou o Lord, that I was not born a woman.' With this at the very core of religiosity it isn't difficult to see why it is s****t, but having men in power in churches and religion serves to compound it. Even things as central to religions as female images compound female oppression. Female deities are found in all religions and always take on either the motherly, caring role or appear dangerous and threatening. In few are they the dominant image. s****t notions in religious books and passive, subjugated female deities at the core of world religions can only serve to have negative consequences for women. Although religion has positive effects on women, these could be achieved without the s****t ideology, and in conclusion it is true that religion, in general, has negative consequences for women. ...read more.