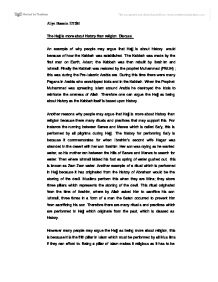 The Hajj is more about history than religion. Discuss.

The Hajj is more about history than religion. Discuss. An example of why people may argue that Hajj is about history would because of how the Kabbah was established. The Kabbah was made by the first man on Earth, Adam; the Kabbah was then rebuilt by Ibrahim and Ishmail. Finally the Kabbah was restored by the prophet Muhammad (PBUH); this was during the Pre-Islamic Arabia era. During this time there were many Pagans in Arabia who worshipped idols and in the Kabbah. When the Prophet Muhammad was spreading Islam around Arabia he destroyed the idols to reinforce the oneness of Allah. Therefore one can argue the Hajj as being about history as the Kabbah itself is based upon history. ...read more.

Another example of a ritual which is performed in Hajj because it has originated from the history of Abraham would be the stoning of the devil. Muslims perform this when they are Mina; they stone three pillars which represents the stoning of the devil. This ritual originated from the time of Ibrahim, where by Allah asked him to sacrifice his son Ishmail, three times in a form of a man the Satan occurred to prevent him from sacrificing his son. Therefore there are many rituals and practices which are performed in Hajj which originate from the past, which is classed as history. However many people may argue the Hajj as being more about religion, this is because it is the fifth pillar in Islam which must be performed by all Muslims if they can afford to. ...read more.

Hajj is a religious place for Muslims as this was the central place for the Muslim community, as this was were Islam officially emerged. Muslims believe that Muhammad (PBUH) was born in Arabia which makes it holy land. Also Mount Arafat is a sacred place as this was where Muslims believe Adam and Eve were reunited, also on this Mount the great flood stopped and finally this was were the Prophet Muhammad (PBUH) gave his last sermon. In conclusion I conclude that Hajj can be equally argued religious as well as being about history. This is because there are many religious factors about Hajj which are listed above, however Hajj can also be about history as there are historical features such as how the Kabbah was formed. ?? ?? ?? ?? Aliya Hussain 12TSH ...read more.