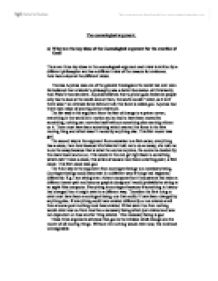 What are the key ideas of the Cosmological argument for the creation of God?

The cosmological argument. a) What are the key ideas of the Cosmological argument for the creation of God? There are three key ideas in the cosmological argument each view is written by a different philosopher and has a different view of the reasons for existence. Lets have a look at the different views. Thomas Aquinas was one of the greatest theologians the world had ever seen. He believed that Aristotle's philosophy was a better foundation of Christianity than Plato's theories were. Aquinas believed that to prove gods existence people only had to look at the world around them, the world couldn't exist, as it is if there wasn't an ultimate force behind it all; this force is called god. Aquinas had three main ways of proving divine existence. The fist way is the argument from the fact of change to a prime mover; everything in the world is in motion and so had to have been moved by something, nothing can move by itself without something else exerting a force on it. There must have been something which exerted the force in the first moving thing and which wasn't moved by anything else. ...read more.

He argues that everything in the universe has an explanation for its existence. Everything must have a reason for being as it is. For example my phone is missing the 8 button because after I lost it I never stuck it back on. I didn't stick it back on because I don't have any glue, I don't have any glue because I don't have any in the house. This could go on forever but there must be an ultimate cause for everything, an underlying cause for everything's existence. This explanation is god. This must exist outside the universe itself otherwise the reason itself would be part of the cycle of reasons which needs explaining. The third argument is known as the Kalam argument as way put forward by two Muslim philosophers called al-Kindi and al-Ghazali. The argument has three steps to it. The first is that everything that exists has a cause; the second is that the universe began to exist; therefore the third is that the universe has a cause. This chain is a chain that cannot carry on forever. ...read more.