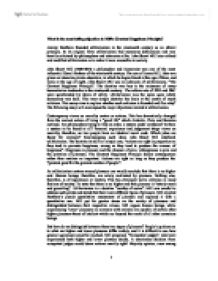 What is the most telling objection to Mill's Greatest Happiness Principle?

What is the most telling objection to Mill's Greatest Happiness Principle? Jeremy Bentham founded utilitarianism in the nineteenth century as an ethical principle. In its original form utilitarianism had numerous deficiencies and was heavily criticised by philosophers and advocates alike. John Stuart Mill later refined and modified utilitarianism as to make it more accessible to society. John Stuart Mill (1806-1873) a philosopher and Economist was one of the most influential liberal thinkers of the nineteenth century. The son of James Mill, John was given an intensive private education, in which he began Greek at the age of three, and Latin at the age of eight. John Stuart Mill was an advocate of utilitarianism, "The Greatest Happiness Principle". The doctrine was key in the naissance of many humanitarian landmarks in the nineteenth century. The reform acts of 1832 and 1867 were spearheaded by ideals of utility. Utilitarianism was the spine upon which democracy was built. This very simple doctrine has been at the centre of much criticism. This essay aims to explore whether such criticism is founded and if so why? The following essay will encompass the major objections leveled at utilitarianism. ...read more.

To spend an evening out with friends, therefore, would be morally wrong. One could be doing aid or charity work instead and thus be increasing the general 'happiness' of the general population. According to utilitarianism, therefore, socialising is wrong. So would other innocent self-indulgent actions such as "sleeping in" on a Sunday. By the same token when should one stop giving money away to charity? Well one should only theoretically stop when you cannot increase the general happiness of the population. Utilitarianism is clearly and impracticable ideal that could never work in contemporary society. Utilitarianism does not validate motives. The "rightness" of an action depends on its ability to produce happiness with no reference to its motive. Can a moral code stay ambivalent over such critical matters? Clearly ones motive is as, if not more important than its consequences. Despite these valid points utilitarianism is only concerned with consequences of actions. But how is it possible to calculate all the possible consequences of an action? How can we ever be sure that any action will produce the greatest net happiness? We might be able to assume, with some certainty, that action (A) ...read more.

Such actions are intrinsically wrong. Deciding what is right and wrong requires more than a mere analysis of effects. One must move away from teleological theories and towards those that consider the extent to which the morality of an act depends on the nature of the act itself. Many objections have been levelled at utilitarianism. Each valid and unrelenting in its criticism. Utilitarianism at a glance advocates injustice, lying and stealing as long as they promote "the general happiness of the population". One must not forget, however, that utilitarianism was instrumental in creating ideals and standards in relation to humanity in the nineteenth century. If utilitarianism was so unpractical would have been so influential in so many key landmarks throughout history? In contemporary society, however, it is just an ideal and not a workable solution. For this reason the theory is deemed with considerable antagonism. How can one follow a doctrine that is almost impossible to accurately interpret? One, therefore, could never be truly a utilitarian or live by its manifesto. How can a doctrine state innocent self-indulgent actions such as socialising with ones friends as morally wrong? How can one ever accurately predict another's reaction? In conclusion the inaccessibility of utilitarianism is its major flaw. ...read more.