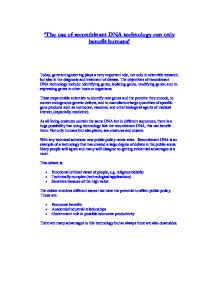 &amp;#145;The use of recombinant DNA technology can only benefit humans&amp;#146;

'The use of recombinant DNA technology can only benefit humans' Today, genetic engineering plays a very important role, not only in scientific research, but also in the diagnosis and treatment of disease. The objectives of recombinant DNA technology include: identifying genes, isolating genes, modifying genes, and re-expressing genes in other hosts or organisms. These steps enable scientists to identify new genes and the proteins they encode, to correct endogenous genetic defects, and to manufacture large quantities of specific gene products such as hormones, vaccines, and other biological agents of medical interest, (especially medicine). As all living creatures contain the same DNA but in different sequences, there is a huge possibility that using technology like the recombinant DNA, this can benefit them. ...read more.

* Technically complex (technological applications) * Sensitive because of the high value The debate involves different issues that have the potential to affect public policy. These are: * Economic benefits * Academic/industrial relationships * Government role in possible economic productivity There are many advantages to this technology but as always there are also downsides. The basis of recombinant technology is that DNA makes RNA and RNA makes protein. 1. Recombinant technology begins with the isolation of a gene of interest. The gene is then inserted into a vector and cloned. A vector (carrier) is a piece of DNA that is capable of independent growth; commonly used vectors are bacterial plasmids and viral phages. ...read more.

When the cells are grown in vast quantities, the foreign or recombinant protein can be isolated and purified in large amounts. Recombinant DNA technology is not only an important tool in scientific research, but has also resulted in enormous progress in the diagnosis and treatment of certain diseases and genetic disorders in many areas of medicine. There are many ways in which this technology can help humans and human life; For example production of insulin using bacterium cells, where the gene of interest, the insulin gene is cut out and paced in a plasmid which is placed in a harmless bacteria where production of protein (insulin takes place), advantages are that you can produce insulin in large quantities Apart from helping just the human body it can also be used to help the animal kingdom; ...read more.