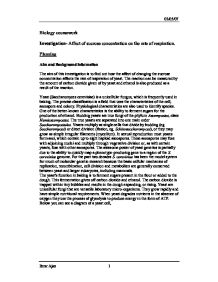 Affect of sucrose concentration on the rate of respiration.

Biology coursework Investigation- Affect of sucrose concentration on the rate of respiration. Planning Aim and Background information The aim of this investigation is to find out how the affect of changing the sucrose concentration affects the rate of respiration of yeast. The reaction can be measured by the amount of carbon dioxide given of by yeast and ethanol is also produced as a result of the reaction. Yeast (Saccharomyces cerevisiae) is a unicellular fungus, which is frequently used in baking. The precise classification is a field that uses the characteristics of the cell, ascospore and colony. Physiological characteristics are also used to identify species. One of the better-known characteristics is the ability to ferment sugars for the production of ethanol. Budding yeasts are true fungi of the phylum Ascomycetes, class Hemiascomycetes. The true yeasts are separated into one main order Saccharomycetales. Yeasts multiply as single cells that divide by budding (eg Saccharomyces) or direct division (fission, eg. Schizosaccharomyces), or they may grow as simple irregular filaments (mycelium). In sexual reproduction most yeasts form asci, which contain up to eight haploid ascospores. These ascospores may fuse with adjoining nuclei and multiply through vegetative division or, as with certain yeasts, fuse with other ascospores. The awesome power of yeast genetics is partially due to the ability to quickly map a phenotype-producing gene to a region of the S. cerevisiae genome. For the past two decades S. cerevisiae has been the model system for much of molecular genetic research because the basic cellular mechanics of replication, recombination, cell division and metabolism are generally conserved between yeast and larger eukaryotes, including mammals. The yeast's function in baking is to ferment sugars present in the flour or added to the dough. This fermentation gives off carbon dioxide and ethanol. The carbon dioxide is trapped within tiny bubbles and results in the dough expanding, or rising. Yeast are unicellular fungi that are versatile laboratory micro-organisms. ...read more.

For this I checked everything was set up correctly at each reading and prepared my solution each time in the same way. To obtain more reliable results I would want complete continuity with preparations, arranging sets of substances to create multiple solutions beforehand or preparing them but not actually activating the yeast, so as to prevent any getting a head start over the others. This would ensure that all the preparations are the same and would give continuity. I would also want to be more strict and thorough with preparing solutions and mixing them up. I would want each one to be thoroughly acclimatised to the surroundings and had the same amount of yeast added, same activating time and mixing time. This would enable me to obtain more reliable results throughout. If I were to further investigate this experiment and my results I would probably calculate the point at which where the enzymes begin to denature for respiration in yeast. I could also examine validity and continuity, also may be included them in more intricate calculations which include log. Looking at my investigation as a whole I don't think there are any major limitations which may have affected my results but I think a limitation might have been in the results that I have taken. As I think that it would have been more appropriate to investigate the masses of sucrose up to 15 grams. As this would of shown definitely whether or not the graph would level off or if it would decrease more and then level off. So I think this was a limitation in my investigation as the trend stated in my prediction could have been reinforced if the graph fully showed the trend explained in my prediction. More generally, my results are fairly consistent, as well as being consistent with the prediction, which is an indication that they are reliable, as the primary quantitative prediction as to the rate of respiration increasing as the concentration of sucrose increases appears to be conclusively and reliably proven. 02/05/07 Ibrar Ajaz 1 ...read more.