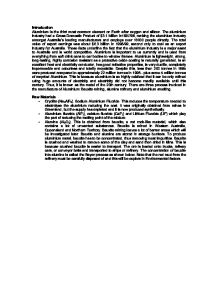 Aluminium is the third most common element on Earth after oxygen and silicon.

Introduction Aluminium is the third most common element on Earth after oxygen and silicon. The aluminium industry had a Gross Domestic Product of $3.1 billion in1997/98, ranking the aluminium industry amongst Australia's leading manufacturers and employs over 16000 people directly. The total value of export earnings was about $6.3 billion in 1998/99, second only to coal as an export industry for Australia. These facts underline the fact that the aluminium industry is a major asset to Australia and is world competitive. Aluminium is important to us currently and is used from everything from soft drink cans to car bodies to window frames. Aluminium is lightweight, strong, long-lasting, highly corrosion resistant as a protective oxide coating is naturally generated, is an excellent heat and electricity conductor, has good reflective properties, is very ductile, completely impermeable and odourless and totally recyclable. Despite this, less than 200 tonnes in 1885 were produced compared to approximately 22 million tonnes in 1998 - plus some 5 million tonnes of recycled Aluminium. This is because aluminium is so highly oxidized that it can be only refined using huge amounts of electricity and electricity did not become readily available until this century. Thus, it is known as the metal of the 20th century. There are three process involved in the manufacture of Aluminium: Bauxite mining, alumina refinery and aluminium smelting. Raw Materials - Cryolite (Na3AlF6). ...read more.

Two main causes of this are the reoxidation of aluminium metal by carbon dioxide and high temperature, as well as side reactions wasting energy. Computers are now being used to monitor each pot continuously and set a best voltage for any particular condition reducing energy consumption. Covering the top of the anodes with an insulator to prevent them burning off and improved quality of carbon anodes reduces energy loss. Australia's comparatively has a low consumption of power for each kilogram of aluminium produced. Research is currently being done to find an alternative extraction process and the two main ways are through carbon reduction and electrolysis of aluminium chloride. The Product Aluminium, Al a Group III element is the product that results. Its properties and uses were discussed above. Other than the pure substance, alloys are also made containing copper, magnesium, manganese, chromium, silicon, nickel, iron and zinc. Quality control issues include the issue that normal refining processes do not remove all the impurities from aluminium, so most commonly used industrial aluminium already has small amounts of impurities alloyed with it. Fortunately, this makes aluminium stronger but remains easy to bend. Some alloys are less suitable for extrusion than others, requiring higher pressures, allowing only low extrusion speeds and/or having less than acceptable surface finish and section complexity. Aluminium sheets which are rolled from ingots are not flat when produced from the rolling mills. ...read more.

When land is mined for Bauxite, active reforestation must be carried out to ensure the stability of the environment as well as ensuring that the soil left over doesn't erode and cause mud slides. Extreme care must be taken with the handling and disposal of red mud from the refineries. This is usually pumped into dams which are sealed with impervious material to prevent pollution of surrounding countryside. The manufacture of aluminium produces carbon dioxide, a greenhouse gas, fluoride gas, a toxic gas and other exhaust gases (such as the sulphur and nitrate oxides) that can potentially be harmful. To combat their pollution, all pots are covered and the fumes are drawn into a fume duct where the gases pass through beds of alumina which adsorbs over 99%of the fluoride. All cryolite needs to be manufactured synthetically and suitable fluorides are expensive and so they need to be recovered. The gases then pass through dust filter bags and a dry scrubber and treatment facilities to remove the greenhouse and other gases and only clean air is released. Although manufacture of aluminium uses a lot of energy and other options to mine aluminium are being investigated (as shown above), the use of aluminium itself has saved a large amount of energy because they are strong and light. It is estimated that 1,230 litres of petrol was saved in cars that used 64 kg of aluminium instead of other metals and this saved more than five times the energy required to produce each kilogram of aluminium used in the car. ...read more.