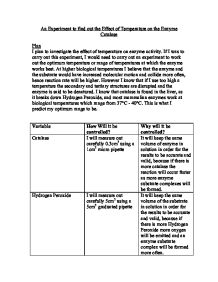 An Experiment to find out the Effect of Temperature on the Enzyme Catalase.

I did not carry out this part of the plan because I realized that when I seal the system, air will be trapped inside, so the oxygen expelled by the reaction will not actually reach the gas burette, instead it may just force the air present inside the system into the gas burette, hence I thought that my glowing splint would not relight as it is unlikely to be exposed to pure oxygen. Another reason I did not test for oxygen is because in some of the reactions only a small amount of oxygen would be released and may not be enough to re-light the glowing splint, in addition the oxygen collected woud be located at the top of the gas burette and my splints were too short to reach that far up the gas burette. I controlled the pH by adding 0.5cm3 pH 8 buffer to every reaction so that hydrogen ions or hydroxide ions were kept constant because they may affect the rate at which the catalase functions. I controlled the volume of catalase each time because if there is more catalase in a specific reaction than in the other reactions it will occur faster as more enzyme substrate complexes will be formed. I controlled the volume of the Hydrogen Peroxide each time because if there is more Hydrogen Peroxide in a particular experiment more oxygen will be emitted, because enzyme substrate complexes will be formed more often. I controlled the light intensity by keeping the Hydrogen peroxide in a brown jar and conducting the entire experiment in the same room. If the light intensity was varied it may have forced the Hydrogen Peroxide to break down faster. Results Preliminary experiment results to work out optimum pH around neutral conditions, at room temperature: ph 6 Time in seconds 1st attempt Oxygen released (cm3) 2nd attempt Oxygen released (cm3) 3rd attempt Oxygen released (cm3) ...read more.

So it would not have affected any conclusions that I have drawn. The high reading of oxygen evolved after 15 seconds at 25�C on one of my graphs may be from the force at which the Hydrogen Peroxide was added to the catalase and pH buffer. This could have affected the results as if the syringe was emptied quickly it would mix with the catalase in the test tube faster, giving the catalase more Hydrogen Peroxide to break down at an earlier point in time. This had an affect on the earlier points on my graphs, but not on the general pattern and hence would not have affected any conclusions that I have drawn. If I did this experiment in the future I might unhook the delivery tube each time I wanted to measure a reading from the gas burette. This would help as I would have more accurate readings by creating more time to collect the measurements. I would also use a more accurate syringe to measure out the Hydrogen Peroxide so that the same amount of substrate was added to each reaction, thus giving me more reliable results. It would also help to support the conclusions that I have drawn from this experiment. The evidence I collected is what I expected to find, however in my opinion it is not enough to produce a firm valid conclusion. The maximum yield of oxygen at 35�C is roughly normal although I do expect to find that the optimum would be a little higher, than the max yield that I obtained. In order to produce a firm valid conclusion I would have to repeat the experiment on the temperatures between 35�C-45�C, so that I could find out the exact optimum temperature. Also I would have to conduct the experiment at lower temperatures, on the rising curve, so that I can obtain a full reaction rate curve. I could have also measured the pH in every reaction instead of just relying on the pH buffer to do its job. This would have further validated the results I obtained. ?? ?? ?? ?? ...read more.