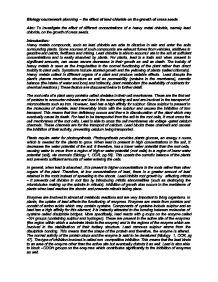 Biology coursework planning - the effect of lead chloride on the growth of cress seeds Aim: To investigate the effect of different concentrations of a heavy metal chloride, namely lead chloride, on the growth of cress seeds. Introduction: Heavy metals compounds, such as lead chloride are able to dissolve in rain and enter the soils surrounding plants. Some sources of such compounds are exhaust fumes from vehicles, additives in gasoline and paints, fertilisers and mining. Lead chloride is able to accumulate in the soil at sufficient concentrations and is easily absorbed by plants. For plants, lead is a toxin and when present in significant amounts, can cause severe decreases in their growth as well as death. The toxicity of heavy metals is seen as the irregularities in the normal functioning of the plant rather than direct toxicity to plant cells. Symptoms include stunted growth and the yellowing of plants (called chlorosis). Heavy metals collect in different organs of a plant and produce variable effects. Lead disrupts the plant's plasma membrane structure as well as permeability (proteins in the membrane), osmotic balance (the intake of water and ions) and indirectly, plant metabolism (the availability of nutrients for chemical reactions.) These factors are discussed below in further detail. The root cells of a plant carry proteins called chelates in their cell membranes. These are the first set of proteins to encounter minerals and ions in the surrounding soil and are involved in the transport of micronutrients such as iron. However, lead has a high affinity for sulphur. Since sulphur is present in the molecules of chelate, lead irreversibly binds with the sulphur and causes the inhibition of iron transport. This means that iron deficiency occurs and there is discolouration of the plant which may eventually cause its death. For lead to be transported from the soil to the root cells, it must cross the cell membranes of the root cells. ...read more.

This is due to the fact that all the water may not have evaporated in the oven and so the mass obtained would not be the actual dry mass. By finding the biomass when two consecutive masses have been achieved, ensures that all the solution has evaporated from the seeds. Heating the seeds further would then have no effect on their dry mass. The seeds from all the lead chloride concentrations are put in the oven at the same time or else an unfair test would be produced if the seeds in some of the petri dishes are left to grow for a longer period. This would ultimately lead to inaccurate results. Safety: Lead chloride is a potentially harmful substance for humans as well we plants. Safety goggles, protective gloves and lab coats should be worn at all times during the experiment, with long hair tied back as lead chloride is an irritant - it can cause painful skin irritations and serious damage when in contact with the eyes. Lead chloride, being toxic and a poison, can be very dangerous if it is inhaled or swallowed - it can damage internal systems such as the respiratory tract, the central nervous system, reproductive system and the blood. Lead poisoning can also develop causing muscle cramps and vomiting. It is therefore vital to keep the room well ventilated in order to avoid inhaling dust and fumes from the lead chloride. The lead chloride should be removed from the bottle and poured into a beaker, as it will be easier to handle smaller amounts of the lead chloride than using it straight from the bottle. However, at other times, it is necessary to keep the lead chloride in a tightly sealed bottle. In the event of broken glass or spillages, these should be attended immediately and cleaned safely and carefully. The lead chloride must not be disposed down the sink and the working area must be cleaned thoroughly with water. The cotton pads soaked with lead chloride should be placed in a bag to give to the teacher who can safely dispose it. ...read more.

This is a very detailed and well structured report.
1. The introduction is very well written and includes excellent research.
2, The sources of information need to be referenced.
3. The level of detail in all sections is good.
4. The report needs to have a centralized analysis section and an evaluation.
*****