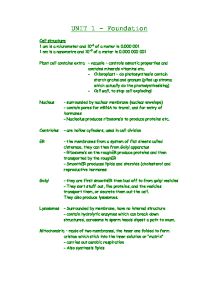 UNIT 1 - Foundation Cell structure 1 um is a micrometer and 10-6 of a meter ie 0.000 001 1 nm is a nanometre and 10-9 of a meter ie 0.000 000 001 Plant cell contains extra - vacuole - controls osmotic properties and contains minerals vitamins etc. - Chloroplast - do photosynthesis contain starch grains and granum (piled up stroma which actually do the photosynthesising) - Cell wall, to stop cell exploding! Nucleus - surrounded by nuclear membrane (nuclear envelope) - contain pores for mRNA to travel, and for entry of hormones - Nucleolus produces ribosome's to produce proteins etc. Centrioles - are hollow cylinders, used in cell division ER - the membranes from a system of flat sheets called cisternae, they can then from Golgi apparatus - Ribosome's on the roughER produce proteins and then transported by the roughER - SmoothER produces lipids and steroids (cholesterol and reproductive hormones Golgi - they are first smoothER then bud off to from golgi vesicles - They sort stuff out, like proteins, and the vesicles transport them, or secrete them out the cell. They also produce lysosomes. Lysosomes - Surrounded by membrane, have no internal structure - contain hydrolytic enzymes which can break down structures, acrosome in sperm heads digest a path to ovum. Mitochondria - made of two membranes, the inner one folded to form cristae which stick into the inner solution or "matrix" - carries out aerobic respiration - Also synthesis lipids Plasma membrane - 7nm - Partially ...read more.

in ribosome peptidyl-tranferase; tRNA leaves; When stop codon reached mRNA leaves and chain is complete *One polypeptide codes for one gene Insulin mRNA is taken and is grown to form DNA for insulin; this is completed by reverse transcriptase the ends are then treated with guanine nucleotides The bacteria (vector) is then treated to dissolve membrane and then centrifuged to separate out the plasmid (circular DNA) Then cut open using a restriction enzyme Then the ends are treated with cytosine They then mix and using DNA ligase the T and G groups join Plasmid placed inside a bacteria cell and fermented to produce insulin. Factor VIII needed for blood clotting, made by modified hamster cells Nuclear Division Diploid is 2 chromosomes Haploid is one chromosome Humans have 23 pairs i.e. 46 Karotype is a picture that shows chromosomes A chromatid has one DNA molecule Gene controlling a particular characteristic is an allele (i.e. on both chromosomes) Mitosis is cell division, meiosis is haploid production The cell cycle - interphase, nuclear division and cell division During interphase the cell is doing normal jobs and then replicates DNA when told and centrioles Nuclear division is then done by mitosis Early prophase - chromosomes coil up Late prophase - centrioles move to poles, nucleolus and envelope disappear (go into vesicles) Metaphase - spindle fibres form between centromeres and centrioles after they are lined up along the equator Anaphase - they move to poles centromeres first Telophase - stuff reappears, cytoplasm split by cytokinesis ...read more.

bones and gut Racking cough, coughing blood, chest pain, shortness of breath, fever, sweating, weight loss microscopical analysis of sputum, or chest x-ray Lymphocytes, phagocytes (neutrophils and macrophages) Neutrophils can leave the blood stream and patrol tissues, don't live long also clean up dead tissue Macrophages also from bone marrow, in blood stream are moncytes then grow to macrophages, usually live in organs removing matter and if a disease is found dice the bacterium up to expose the antigen When cells die they release histamine as well as toxins from pathogen Neutrophils get attracted and bind to present antibodies resulting in endocytosis and excretion B lymphocytes - mature in bone marrow then lymph nodes and spleen, can only make one antibody, they then make receptor proteins for the specific antigen and if contact is made, the B cell divides and turns in to plasma cells which produce the antibodies needed, extras are kept for memory T lymphocytes - created in bone marrow mature in thymus gland, t helper cells release a hormone to stimulate B cell system, t killer cells will attach themselves to infected cell and inject H2O2 killing cell and pathogens inside, t cells also produce memory cells similar to B cells natural active immunity - body fights it off artificial active immunity - body fights dead parts, or antigens(a vaccine) natural passive immunity - antibodies received from breast milk artificial passive immunity - injected antibodies, antitoxins antigenic drift - minor changes in antigen but still recognizable antigenic shift - major change resulting in the need for another vaccine (INSERT ANTIBODY PICTURE) ...read more.