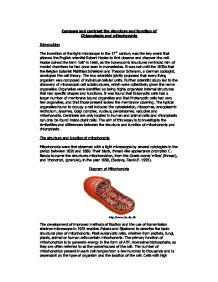 Compare and contrast the structure and function of Chloroplasts and mitochondria

Compare and contrast the structure and function of Chloroplasts and mitochondria Introduction The invention of the light microscope in the 17th century was the key event that allowed the English scientist Robert Hooke to first observe and discover the cell. Hooke coined the term 'cell' in 1665, as the honeycomb structures reminded him of monks' chambers he had once seen in monasteries. It was not until the 1830s that the Belgian botanist Matthias Schleiden and Theodor Schwann, a German zoologist, developed the cell theory. The two scientists jointly proposed that every living organism was composed of individual cellular units. Further scientific study led to the discovery of microscopic cell substructures, which were collectively given the name organelles. Organelles were identified as being highly organised internal structures that had specific shapes and functions. It was found that Eukaryotic cells had a larger number of membrane bound organelles and that Prokaryotic cells had very few organelles, and that those present lacked the membrane covering. The typical organelles found to occupy a cell included the cytoskeleton, ribosomes, endoplasmic recticulum, lysomes, Golgi complex, nucleus, peroxisomes, vacuoles and mitochondria. Centrioles are only located in human and animal cells and chloroplasts can only be found inside plant cells. The aim of this essay is to investigate the similarities and differences between the structure and function of mitochondria and chloroplasts. ...read more.

An envelope of two phospholipid membranes, the outer membrane and the inner membrane surround each chloroplast. The two membranes are separated by a narrow intermembrane space. The outer membrane is quite rigid in structure and contains porins that make it permeable to small organic molecules and ions. The inner membrane acts as a barrier as transport proteins prevent anything other than water, carbon dioxide and oxygen crossing into the internal cavity. The inner part of the chloroplast is named the stroma and is a gel like matrix containing many enzymes, starch grains, some pigments, protein, ribosomes and the circular chloroplast DNA. The stroma is the location where light independent reactions occur and also contains the enzymes required for the Calvin cycle. Chloroplasts also feature a third internal membrane system, the thylakoids. Thylakoids are flat sac like structures suspended in the stroma and are usually arranged into stacks termed grana. The area inside the internal membrane system is referred to as the thylakoid space and contains the pigment chlorophyll. The extensive folding of the inner membrane provides a great increase in surface area, making it approximately 600 times larger. The membranes of the grana hold the electron carriers needed for light dependant reactions, ATP synthetase, and make synthesis possible. The internal layer of the membrane is hydrophobic so the hydrophilic heads of the chlorophyll molecules lie flat on the surface, not unlike solar panels. ...read more.