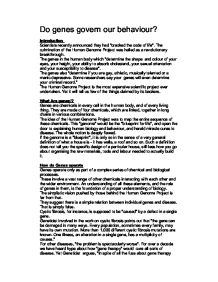 Do genes govern our behaviour?

Do genes govern our behaviour? Introduction Scientists recently announced they had "cracked the code of life". The culmination of the Human Genome Project was hailed as a revolutionary breakthrough. The genes in the human body which "determine the shape and colour of your eyes, your height, your ability to absorb cholesterol, your sexual orientation and your susceptibility to disease". The genes also "determine if you are gay, athletic, musically talented or a manic depressive. Some researchers say your genes will even determine your criminal record." The Human Genome Project is the most expensive scientific project ever undertaken. Yet it will tell us few of the things claimed by its backers. ...read more.

How do Genes operate Genes operate only as part of a complex series of chemical and biological processes. These involve a vast range of other chemicals interacting with each other and the wider environment. An understanding of all these elements, and the role of genes in them, is the foundation of a proper understanding of biology. The simplistic vision pushed by those behind the Human Genome Project is far from that. They suggest there is a simple relation between individual genes and disease. That is simply false. Cystic fibrosis, for instance, is supposed to be "caused" by a defect in a single gene. Geneticist involved in the work on cystic fibrosis points out that "the gene can be damaged in many ways. ...read more.

Claims about a "criminal gene", for example, are an attempt to deflect discussion from the real causes, which are social and linked to class and poverty, and from considering what is meant by crime. Stealing to feed your family is crime. But stealing from workers for profit isn't. What is particularly obscene about the Human Genome Project is the way profit-hungry corporations have seized on it to patent human genes. These companies hope they can make millions from pushing genetically based "cures" based on such patents. They may well come a cropper on that quest. But in the process the same drive could see these patents used to release all sorts of untested and potentially dangerous chemicals and organisms. ...read more.