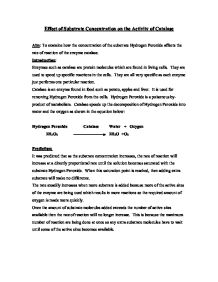 Effect of Substrate Concentration on the Activity of Catalase.

Effect of Substrate Concentration on the Activity of Catalase Aim: To examine how the concentration of the substrate Hydrogen Peroxide affects the rate of reaction of the enzyme catalase. Introduction: Enzymes such as catalase are protein molecules which are found in living cells. They are used to speed up specific reactions in the cells. They are all very specific as each enzyme just performs one particular reaction. Catalase is an enzyme found in food such as potato, apples and liver. It is used for removing Hydrogen Peroxide from the cells. Hydrogen Peroxide is a poisonous by-product of metabolism. Catalase speeds up the decomposition of Hydrogen Peroxide into water and the oxygen as shown in the equation below: Hydrogen Peroxide Catalase Water + Oxygen 2H2O2 2H2O +O2 Prediction: It was predicted that as the substrate concentration increases, the rate of reaction will increase at a directly proportional rate until the solution becomes saturated with the substrate Hydrogen Peroxide. When this saturation point is reached, then adding extra substrate will make no difference. The rate steadily increases when more substrate is added because more of the active sites of the enzyme are being used which results in more reactions so the required amount of oxygen is made more quickly. Once the amount of substrate molecules added exceeds the number of active sites available then the rate of reaction will no longer increase. ...read more.

Where the substrate is in short supply (i.e. it is limiting) an increase in enzyme concentration has no effect. The enzyme concentration was varied by altering the number of equal sized discs of potato that contain the Catalase, in the reaction. The greater the number of discs, the greater the enzyme concentration. When measuring the volumes of Hydrogen Peroxide, the measurement should be the taken from a 90-degree angle to avoid parallax error. Apparatus: * Bung with delivery tube * Gas syringe barrel (20cm3) * Clamp stand * Syringe(5cm3) * 50 cm3 pH 7 buffer * Hydrogen Peroxide 50 cm3 (5-25 volume) * Knife * Beaker * Test tubes * Test tube rack * Ceramic tile * Stop clock * Safety goggles * Forceps * Ruler * Potato * Cock borer 10mm diameter Take care with the Hydrogen Peroxide. Wear safety goggles and try to get any on the skin, wash it off immediately if you do. Method: * Using the cork borer, cut a cylinder of potato tuber tissue into cm intervals using a knife and plastic ruler. Slice the cylinder into discs 1mm thick. * Place the discs into a few cm of pH 7 buffer in a beaker to keep them moist. * Assemble the apparatus shown below. * Take particular care against breakage as you insert the delivery tube into the syringe barrel. ...read more.

Evaluation: To enable this experiment to be completed as accurate as possible, it was repeated three times and then an average of all the results was used to plot a graph with a line of best fit. The variables for all the experiments were the same except for the concentration of Hydrogen Peroxide. However, in reality it is impossible to keep all the variables precisely the same for example: * There was a slight delay between pouring the Hydrogen Peroxide with the potato discs into the test tube of each individual experiment but as all the three steps were carried out in the same way for all the experiments, it should not make any difference to the overall result. * It is also impossible to precisely measure out the amounts of Hydrogen Peroxide and pH 7 buffer each time. As the scale on the syringe shows the volume to the nearest mm3, the volumes of the solutions were correct to the nearest mm3. There were no anomalies found in this experiment. As using catalase found in potatoes, the desired amount was hard to measure. Measuring the amount of potato wasn't difficult although the pieces could have contained different amounts of catalase compared to another piece. The results that were shown from both pieces could be negotiable. The problem of the delay between pouring in the Hydrogen Peroxide, bunging the test tube and starting the stop clock could have been limited by getting another person to start the stop clock when the Hydrogen Peroxide was poured into the tube. ...read more.