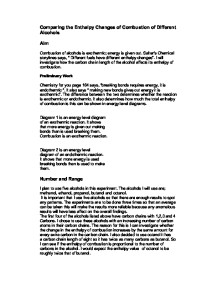 Comparing the Enthalpy Changes of Combustion of Different Alcohols Aim Combustion of alcohols is exothermic; energy is given out. Salter's Chemical storylines says, " Different fuels have different enthalpy changes". I will investigate how the carbon chain length of the alcohol affects its enthalpy of combustion. Preliminary Work Chemistry for you page 184 says, "breaking bonds requires energy, it is endothermic ". It also says " making new bonds gives out energy it is exothermic". The difference between the two determines whether the reaction is exothermic or endothermic. It also determines how much the total enthalpy of combustion is this can be shown in energy level diagrams. Diagram 1 is an energy level diagram of an exothermic reaction. It shows that more energy is given out making bonds than is used breaking them. Combustion is an exothermic reaction. Diagram 2 is an energy level diagram of an endothermic reaction. It shows that more energy is used breaking bonds than is used to make them. Number and Range I plan to use five alcohols in this experiment. The alcohols I will use are; methanol, ethanol, propanol, butanol and octanol. It is important that I use five alcohols so that there are enough results to spot any patterns. The experiments are to be done three times so that an average can be taken this will make the results more reliable because any anomalous results will have less affect on the overall findings. ...read more.

Using calculations I will calculate the enthalpies of composition for my chosen alcohols. Then I will do experiments to find the enthalpies of combustion from my chosen alcohol. I will compare the two results to help me reach my conclusion. Equipment List Methanol, ethanol, propanol, butanol, octanol Alcohol burners (5) Lamp stand Clamp Heatproof mat Copper can Thermometer Card windshield Measuring cylinder Scales Method The apparatus was set up as shown in the diagram with the draft shield around the. 100 cm3 of water was measured using the measuring cylinder and poured into the copper can. The initial mass of the alcohol burner will be recorded and the initial temperature of the water will be recorded. The distance between the copper can and the burner was measured and made to be 7cm. When this has been done the burner can be lit. When the temperature of the water reaches 50oC the flame on the burner will be extinguished. The burner will be weighed and the mass will be recorded. I decided that I would burn the alcohol until the water reached 50oC so that enough energy has been transferred for an accurate experiment. The heat from the flame heats up the copper can, which conducts the heat and energy to the water. Copper is a good conductor which is why a copper can is used, most of the heat the copper can gets will be transferred. ...read more.

However this also means that less energy is given out to make bonds so they give out less energy than alcohols with longer carbon chains. This can be shown with energy level diagrams. Diagram 1 is an energy level diagram for the combustion of an alcohol with a longer carbon chain. There is more energy needed to break bonds but also more energy is given out to make bonds because there are more atoms to be bonded. The calculated enthalpy of combustion for methanol is - 658 kj/mol. The calculated enthalpy of combustion for Octanol is - 4984 kj/mol. With the combustion of Octanol more energy is given out than with Methanol because the enthalpy is lower which means more heat is given out. I predict that the difference between the enthalpies of combustion of the alcohols will be approximately 618 kj/mol. Because that is the difference between the enthalpies of combustion I have calculated for these alcohols with carbon chains where one carbon and two hydrogen atoms have been added the enthalpy will give out an extra 618 kj/mol. I also think that alcohols enthalpies of combustion will be roughly proportional to each other. Butanol has four carbons in its chain and Octanol has eight. So Octanol should give out roughly twice as much energy. Octanols enthalpy calculated was -4984 and Butanols was -2512. If we make these positive to show the energy given out half of ectanol is 2492 which is close to 2512 so they should be similar. ...read more.