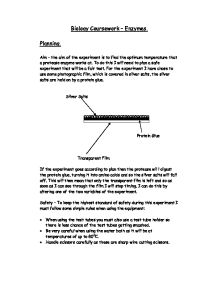 Enzymes - find the optimum temperature that a protease enzyme works at.

Biology Coursework - Enzymes. Planning. Aim - the aim of the experiment is to find the optimum temperature that a protease enzyme works at. To do this I will need to plan a safe experiment that will be a fair test. For the experiment I have chose to use some photographic film, which is covered in silver salts, the silver salts are held on by a protein glue. Silver Salts Protein Glue Transparent Film If the experiment goes according to plan then the protease will digest the protein glue, turning it into amino acids and so the silver salts will fall off. This will then mean that only the transparent film is left and so as soon as I can see through the film I will stop timing. I can do this by altering one of the two variables of the experiment. Safety - To keep the highest standard of safety during this experiment I must follow some simple rules when using the equipment: * When using the test tubes you must also use a test tube holder so there is less chance of the test tubes getting smashed. * Be very careful when using the water bath as it will be at temperatures of up to 800C. * Handle scissors carefully as these are sharp wire cutting scissors. Variables - there are two main key variables in this experiment, by varying one of them I can complete the experiment and find the results that I need. ...read more.

The graph shows that the optimum temperature for a particular enzyme is 37oC - this is its optimum temperature after this it becomes DENATURED. Enzymes - shape. Every enzyme has a particular shape, which is individual to it, this means that on enzyme can only digest on type of food, for example: - PROTEASE PROTEIN CARBOHYDRASE CARBOHYDRATES LIPASE FATS Lock and Key. The enzyme digests the food molecule in the same way that a key opens a lock, only one enzyme can digest a particular food molecule. Above is a diagram of how an enzyme works, the food molecule on the right is the perfect fit for the enzyme and it would be the only one of its kind so no other food molecule could fit this enzyme and vice versa. The red part of the enzyme is the active site. The active site binds the substrate and then the enzyme digests it. Method- 1. Collect the apparatus that is needed to do the experiment. 2. Cut a strip of photographic film from the same area on the big role of film (the length should be about 40 holes on either side). 3. Cut photographic film up into smaller pieces and thread them with a piece of wire that is longer than a test tube. 4. Using a syringe put 2ml of the enzyme into each of the four test tubes. ...read more.

The curve on the graph is quite reliable but not perfect, it gives a good idea of what the perfect curve would look like. I have one or two anomalous results, I expect these are because I could only check one of the test tubes at a time which means that the salts may have fallen off in the last test tube but I was only getting round to checking the second test tube. This means that the average time for that temperature would be slowed down and so the rate would be lower and this would affect the graph. If I were to do this experiment again I would definitely use more test tubes and I would get more people to check the test tubes more often to give a more accurate result. To extend the enquiry I could do one of two things, I could find the optimum temperature for other enzymes such as carbohydrase and lipase, and I could use the result to see if there were any connections in optimum temperatures between all the enzymes. Another test I could do is to see what the optimum pH for the protease enzyme would be. To extend the experiment that I have already done I could find what I have recorded as the two fastest rate temperatures and do one last experiment. So if the highest two rates were 500C and 600C this would mean I should repeat the experiment at 550C, this should give me a more accurate optimum temperature. ...read more.