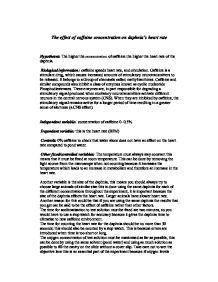 The effect of caffeine concentration on daphnia's heart rate Hypotheses: The higher the concentration of caffeine the higher the heart rate of the daphnia. Biological information: caffeine speeds heart rate, and circulation. Caffeine is a stimulant drug, which causes increased amounts of stimulatory neurotransmitters to be released. It belongs to a Group of chemicals called methylxanthines. Caffeine and similar compounds also inhibit a class of enzymes known as cyclic nucleotide Phosphodiesterases. These enzymes are, in part responsible for degrading a stimulatory signal produced when excitatory neurotransmitters activate different neurons in the central nervous system (CNS). When they are inhibited by caffeine, the stimulatory signal remains active for a longer period of time resulting in a greater sense of alertness (a CNS effect). Independent variable: concentration of caffeine 0- 0.5% Dependant variable: this is the heart rate (BPM) Controls: 0% caffeine to check that water alone does not have an effect on the heart rate compared to pond water. Other fixed/controlled variables: The temperature must always stay constant this means that it must be fixed at room temperature. This can be done by removing the light source from the microscope when not counting because it increases the temperature which leads to an increase in metabolism and therefore an increase in the heart rate. Another variable is the size of the daphnia, this means you should always try to choose large animals of similar size this is ...read more.

This will ensure you that the daphnia will stay on one place so that it makes it clear to see the heart beat. 4) Put the slide underneath the microscope making sure you use the clip in the microscope and focus the lens to the heart. 5) Next choose one of the four different types of caffeine concentration and put two drops on the cavity slide where the daphnia is placed. 6) Leave it for 2 minutes in order for it to climatise, then start counting the heart beat (you must make sure that you do not get mixed up with the heart and legs) for 30 seconds. 7) You must put in mind that the person that is counting the beats does not know which concentration it is so that the experiment will not be bias; this is called blind counting. 8) Repeat the procedure for all different types of concentration a few times so that it will be accurate. Actual method: a modified method was used by all class members so that the results could be compared 1) Place a few strands of cotton wool on to a cavity slide; this restrict the movement of the water flea. Using a pipette, transfer one large water flea to the slide. Remove the water from around the water flea using filter paper, then add one drop of test solution. ...read more.

3. To measure the pH of the solution making sure that it is neutral and not an acid or an alkali. 4. Finally check that the daphnia is not pregnant or else it would not be a fair test. Summary: My aim in doing this experiment was to find out whether caffeine concentration affected the heart rate of the daphnia. My hypothesis was 'the higher the concentration of caffeine the higher the heart rate (BPM) of the daphnia'. To get accurate results in my experiment I have followed a method where I had to take out a daphnia from the pond water by using a cut off pipette, then the daphnia was places in a cavity slide where it is put underneath the microscope and then clipped to ensure that it stays in one place and focus the lens in the daphnia's heart , then I had to add two drops of caffeine concentration and leave it for 2 minutes to acclimatise so you can start counting its heart beats for 30 seconds, this procedure must be carried out for all the different concentrations. After doing my experiment I have looked back at my hypothesis and I have found out that my results supports my hypothesis. There were a few anomalies that I could have avoided but the errors were minor so it did not have a large effect on my results. I have then drawn an appropriate graph of my results in order to interpret it. I identified that my errors were random. ...read more.