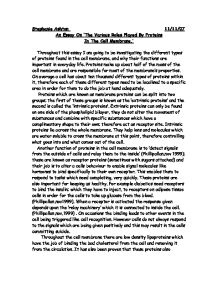 The Various Roles Played By Proteins

Stephanie Ashton 11/11/07 An Essay On 'The Various Roles Played By Proteins In The Cell Membrane.' Throughout this essay I am going to be investigating the different types of proteins found in the cell membrane, and why their functions are important in everyday life. Proteins make up about half of the mass of the cell membrane and are responsible for most of the membrane's properties. On average a cell has about ten thousand different types of proteins within it, therefore each of these different types need to be localised to a specific area in order for them to do the job at hand adequately. Proteins which are known as membrane proteins can be split into two groups; the first of these groups is known as the 'extrinsic proteins' and the second is called the 'intrinsic proteins'. Extrinsic proteins can only be found on one side of the phospholipid bilayer, they do not alter the movement of substances and combine with specific substances which have a complimentary shape to their own; therefore act as receptor site. ...read more.

(Phillipallan,nov,1999) . On occasions the binding leads to other events in the cell being triggered like cell recognition. However cells do not always respond to the signals which are being given positively and this may result in the cells committing suicide. Throughout the cell membrane there are low density lipoproteins which have the job of binding the bad cholesterol from the cell and removing it from the circulation. It has also been proven that these proteins also contribute a lot to carrying the cholesterol from the membrane to other cells in the body which may need it. (Science Daily, Apr. 13, 2000). Similar to the intrinsic proteins trans-membrane protein molecules also help to control what passes through into the cell. These proteins are of specific shape and size (similar to the lock and key method in enzymes) and therefore only substances which match this are allowed to cross. Transport proteins can also be broken up into two groups; the channel proteins and the carrier proteins. ...read more.

Overall a mediocre essay that outlines all the basic A level facts for this level of syllabus. Introduction could be more centered around the question, and the main analytical body of the text could be a lot more in depth ...

Overall a mediocre essay that outlines all the basic A level facts for this level of syllabus. Introduction could be more centered around the question, and the main analytical body of the text could be a lot more in depth and explore topics of proteins around the a level syllabus to gain a higher mark. No conclusion. Response to the question is very scientifically accurate although basic.

Introduction is good, but could set out the main examination basis of the essay better rather than concentrating on broad points about proteins. Language used is basic scientific A level terms that from the beginning stick to the syllabus and the basic sciences used at A level rather than scoping above and beyond. Link structure to function vaguely and makes a few points although they could make a few more real life examples. Do not include a conclusion for the essay and could include a lot more in depth analysis.

Spelling, punctuation and grammar are all adequate and correct but the essay could be organised better, and references should be included in their own separate section at the end of the text.