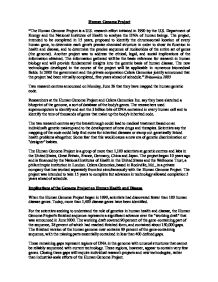 Human Genome Project "The Human Genome Project is a U.S. research effort initiated in 1990 by the U.S. Department of Energy and the National Institutes of Health to analyse the DNA of human beings. The project, intended to be completed in 15 years, proposed to identify the chromosomal location of every human gene, to determine each gene's precise chemical structure in order to show its function in health and disease, and to determine the precise sequence of nucleotides of the entire set of genes (the genome). Another project was to address the ethical, legal, and social implications of the information obtained. The information gathered will be the basic reference for research in human biology and will provide fundamental insights into the genetic basis of human disease. ...read more.

The researchers used supercomputers to identify and sort the 3 billion bits of DNA contained in every human cell and to identify the tens of thousands of genes that make up the body's inherited code. The two research centres say the breakthrough could lead to medical treatment based on an individual's genetic makeup and to the development of new drugs and therapies. Scientists say the mapping of the code could help find cures for inherited diseases or stamp out genetically linked health problems altogether. Some fear that this would cause a new era of genetic discrimination or "designer" babies. The Human Genome Project is a group of more than 1,100 scientists at genetic centres and labs in the United States, Great Britain, France, Germany, China and Japan. ...read more.

Today, more than 1,400 disease genes have been identified. For the scientists seeking to understand the role of genetics in human health and disease, the Human Genome Project's finished sequence represents a significant advance over the "working draft" that was announced in June 2000. The working draft covered 90 percent of the gene-containing part of the sequence, 28 percent of which had reached finished form, and contained about 150,000 gaps. The finished version of the human genome now contains 99 percent of the gene-containing sequence, with the missing parts essentially contained in less than 400 defined gaps. These remaining gaps represent regions of DNA in the genome with unusual structures that cannot be reliably sequenced with current technology. These regions, however, appear to contain very few genes. Closing these gaps will require individual research projects and new technologies, rather than industrial-scale efforts of the Human Genome Project. ...read more.