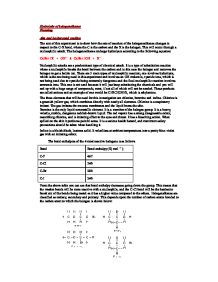 Hydrolysis of halogenalkanes Planning Aim and background reading The aim of this experiment is to show how the rate of reaction of the halogenoalkanes changes in respect to the C-X bond, where the C is the carbon and the X is the halogen. This will occur through a nucleophilic attack. The halogenoalkanes undergo hydrolysis according to the following equation: CnHn+1X + OH� � CnHn+1OH + X� Nucleophilic attacks are a predominant type of chemical attack. It is a type of substitution reaction where a nucleophile breaks the bond between the carbon and in this case the halogen and removes the halogen to get a halide ion. There are 3 main types of nucleophilic reaction; one involves hydrolysis, which is the one being used in this experiment and involves an OH molecule, cyanide ions, which is not being used due to cyanide being extremely dangerous and the final nucleophilic reaction involves ammonia ions. This one is not used because it will just keep substituting the chemicals and you will end up with a huge range of compounds, most, if not all of which will not be needed. These products are called amines and an example of one would be CH3CH2NH2, which is ethylamine. The three elements that will be used for this investigation are chlorine, bromine and iodine. ...read more.

Prediction My prediction for which bond will react most vigorously with the nucleophile is C-I. This is because it has the lowest bond enthalpy and is also very polar because of the large difference of sizes between the carbon and iodine thus allowing the nucleophile to attack the bond much easier. C-Br will not be as easy to break as C-I because the molecule is not as polar and also has a higher bond enthalpy. C-Cl will therefore be the hardest bond to break because it is the least polar and has the highest bond enthalpy of all the bonds being tested. Procedure Before carrying out this experiment a hazard analysis will need to be done. The equipment needed to ensure safety would be; goggles, lab coat, gloves and long hair tied back. Halogenalkanes are highly flammable. Alcohol's are corrosive and can cause irritation to the skin. Equipment * 3x Test tubes * Test tube rack * 2 x10 cm Measuring cylinder * Bunsen burner * Stop Watch * Ethanol * Halogenalkanes, including 1-chlorobutane, 1-bromobutane, 1-iodobutane * 0.02 M Silver Nitrate * Test tube holder and pipette Method 1. Arrange three test tubes, into a test tube rack, in a row. 2. Using the pipette, add 3 drops of the Halogenalkanes in the following sequence: 1-chlorobutane 1-bromobutane 1-iodobutane 3. ...read more.

The timing of the Halogenalkanes may not be accurate as the time taken for the colour change to occur could have happened at the start of the experiment but had taken time to develop into a stronger denser colour. There may have been spillages when transferring the chemicals into the test tubes, which would result in a lower amount of Halogenalkanes being reacted. All these errors would have been caused by human error, as the equipment used was reliable. The experiment was only carried out once. This may suggest that the result obtained may not be reliable as errors may have occurred whilst recording the result. To minimise errors and increase reliability I would have to revise the method and improve it to minimise the errors. The changes that would be made to make the method would be to make what should be done more specific, such as to say that the measurements taken from the cylinder should be poured into each test tube carefully (avoiding spillage's) including the last drop. It would also help if the experiment were repeated at least five times to see whether three timings out of five are the same. It is it only then that the time should be noted as a result. This would not just make the experiment seem more complex it should hopefully increase levels of accuracy and reliabilty. ...read more.