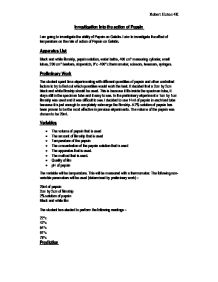 Investigation into the action of Pepsin I am going to investigate the ability of Pepsin on Gelatin. I aim to investigate the effect of temperature on the rate of action of Pepsin on Gelatin. Apparatus List Black and white filmstrip, pepsin solution, water baths, 400 cm� measuring cylinder, small tubes, 200 cm� beakers, stopwatch, 0?c -100?c thermometer, scissors, tweezers, syringes. Preliminary Work The student spent time experimenting with different quantities of pepsin and other controlled factors to try to find out which quantities would work the best. It decided that a 2cm by 2cm black and white filmstrip should be used. This is because it fits inside the specimen tube, it stays still in the specimen tube and it easy to see. In the preliminary experiment a 1cm by 1cm filmstrip was used and it was difficult to see. I decided to use 14ml of pepsin in each test tube because it is just enough to completely submerge the filmstrip. A 2% solution of pepsin has been proven to be the most effective in previous experiments. The volume of the pepsin was chosen to be 20ml. ...read more.

* When the temperature was measured, the thermometer was placed in the pepsin and not the water surrounding it to get the accurate temperature of the pepsin. * The thermometer was kept in the pepsin when the reading was being taken and was not taken out before the reading was taken. * Pepsin levels were kept equal but were enough to make sure the film is totally submerged. * The shaking of the test tubes was controlled - All four repeats were kept in the same rack and shaken for three seconds every two minutes. * When cutting out the 2cm by 2cm filmstrip, lines were drawn on the filmstrip to ensure accuracy when cutting it out. * The part of the filmstrip with holes in was removed and no piece of film with holes in was used, as the surface area would have been reduced. * All four repeats were done at the same time to ensure they were all done at exactly the same temperature. * A colorimeter was used to detect the ideal pepsin turbidity. * The same person decided when the gelatin had fully dissolved so that the same perception was used. ...read more.

* I could find better ways to measure and keep the temperature constant throughout the experiment so that mistakes would not be made with the temperature Further Work For further work, I would carry out and investigation to find the exact temperature for when Pepsin is denatured. I would find the point at which gelatin digested for each individual degree. This would help build up a near perfect solubility graph for the rate of which gelatin digested. This experiment would be done with different percentages of Pepsin, ranging from 1% to 5%. This would show the effects of the different concentrations on the rate of digestion and the point of denaturing. Gelatin could also be replaced by another protein such as egg white, agar jelly or regular jelly. Pepsin would still act as a protease. It would show how the difference in the structure of these proteins effects how the Pepsin acts in them and at what speed. Trypsin and other chemicals could be used instead of the Pepsin to submerge the protein in. In the preliminary experiment, along with using Pepsin, we tried using water to submerge the gelatin filmstrip in but it had no effect, as water is not a protease. Robert Hutton 4K ...read more.

***
This is a reasonably good summary of the investigation but it lacks the attention to detail needed to gain more stars. There is a lack of appropriate biological terminology in many places, and there are inconsistencies in the interpretation of the data.