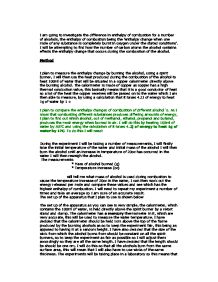 I am going to investigate the difference in enthalpy of combustion for a number of alcohols, the enthalpy of combustion being the 'enthalpy change when one mole of any substance is completely burnt in oxygen under the stated conditions'. I will be attempting to find how the number of carbon atoms the alcohol contains effects the enthalpy change that occurs during the combustion of the alcohol. Method I plan to measure the enthalpy change by burning the alcohol, using a spirit burner, I will then use the heat produced during the combustion of the alcohol to heat 100ml of water that will be situated in a copper calorimeter directly above the burning alcohol. The calorimeter is made of copper as copper has a high thermal conduction value, this basically means that it is a good conductor of heat so a lot of the heat the copper receives will be passed on to the water which I am then able to measure, by using a calculation that it takes 4.2J of energy to heat 1g of water by 1 c I plan to compare the enthalpy changes of combustion of different alcohol�s. As I know that combusting different substances produces differing amounts of energy, I plan to find out which alcohol, out of methanol, ethanol, propanol and butanol, produces the most energy when burned in air. I will do this by heating 100ml of water by 50?C and using the calculation of it takes 4.2j of energy to heat 1g of water by 1?C. To do this I will need: During the experiment I will be taking a number of measurements, I will firstly take the initial temperature of the water and initial mass of the alcohol I will then burn the alcohol until an increase in temperature of 20oc has occurred in the water I will then reweigh the alcohol. The measurements * Mass of alcohol burned (g) ...read more.

to heat taken in per mole of alcohol burned 1.12g Methanol 9240J 1 g " 9240J/1.12 32g " 9240J/1.12 x 32 26400Jmole-1 So there is 264000 J released from 32g which is one mole, to change to KJ simply divide by 1000 Which gives 264kJmole-1 There is also heat absorbed by the calorimeter that I can also work out Specific heat capacity of copper, 0.385 Mass of calorimeter 61.55g Heat energy exchanged = Mass x Specific Heat x Temperature To the copper (g) Capacity Rise (J) (J/g/ oc) (oc) = 66.55 x 0.385 x 22 =521.3J Again this is the heat taken in during the experiment and needs to be converted to heat taken in per mole of alcohol burned 1.12g Methanol 521.3J 1g " 521.3J/1.12g 32g " 521.3J/1.12g x32g 14894.3 Jmole-1 This can also be changed to kJm-1 by dividing by 1000 giving 14.9kJm-1 Adding the two values worked out above for the energy absorbed by the water and the calorimeter gives the total gives the total energy that I have measured to having been released by the combustion of the alcohol. The total energy that I measured for the combustion of methanol example above is 264kJmole-1 + 14.9kJmole-1 = 278.9 kJmole-1 Below I have put in a table the average enthalpy of combustion for my results Alcohol Average measured enthalpy of combustion Methanol 278.4 kJmole-1 Ethanol 539.2 kJmole-1 Propon-1-ol 995.6 kJmole-1 Butan-1-ol 1214.6 kJmole-1 My results show a clear increase in the enthalpy of combustion as the alcohols get larger, Butan-1-ol, the largest alcohol that I have tested shows the highest enthalpy of combustion and methanol, the smallest in size has the smallest value for the enthalpy of combustion. This is as I had expected, as the enthalpy of combustion that I estimated earlier using average bond enthalpy's had predicted. Below is a graph, which compares my results to the bond enthalpy values that I had worked out earlier. ...read more.

I have also decided that the distance the thermometer is suspended in the calorimeter should remain constant as an extra precaution to stirring. The temperature of the water may differ at the top to that at the bottom of the can because heat rises so I have decided to suspend the thermometer at an equal distance of half way up in the centre of the can to ensure fairness. Insulation has been another priority of mine to minimise heat loss. I have silvered the sides of the copper can to minimise heat loss by radiation and insulated the sides of the copper can and the insulation chamber to minimise heat loss by conduction and convection. Heat loss risks affecting the end results of the experiment. Measurements must be made as accurately as possible, because inaccuracy always develops due to human inaccuracy. Every effort must be made to ensure readings are taken to as precise detail as possible using the equipment. % Error can be calculated with any inaccuracy and if this amounts up sp will the inaccuracy of the whole experiment. The beaker I am using has a constant diameter of 10 cm. This is to ensure that the same surface area is exposed each time to the heat being produced. Risk Assessment: There are risks within the experiment and it is essential that I have everything under control when dealing with potential hazards. Methanol and Ethanol HIGHLY FLAMMABLE Vapours will catch fire at temperatures above 13 oC. The narcotic effect of ethanol/methanol is well known and may result from inhalation of the vapour. Methanol and ethanol are TOXIC by inhalation, if swallowed and by skin absorption. There is a danger of very serious irreversible effects though inhalation, in contact with the skin and if swallowed. If swallowed: Wash out mouth and give a glass or two of water. Seek medical attention if victim shows drunken symptoms. If vapour inhaled: Remove victim to fresh air to rest. Keep warm. If liquid splashed in eyes: Flood the eye with ... ...read more.