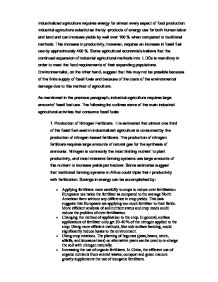 Industrialized agriculture requires energy for almost every aspect of food production. Industrial agriculture substitutes the by-products of energy use for both human labor and land and can increase yields by well over 100 % when compared to traditional methods. This increase in productivity, however, requires an increase in fossil fuel use by approximately 400 %. Some agricultural economists believe that the continued expansion of industrial agricultural methods into LDCs is manditory in order to meet the food requirements of their expanding populations. Environmentalist, on the other hand, suggest that this may not be possible because of the finite supply of fossil fuels and because of the costs of the environmental damage due to this method of agriculture. As mentioned in the previous paragraph, industrial agriculture requires large amountof fossil fuel use. ...read more.

More efficient analysis of soil nutrient status and crop needs could reduce the problem of over fertilization. * Changing the method of application to the crop. In general, surface applications of fertilizer only get 30-40 % of the nitrogen applied to the crop. Using more efficient methods, like sub-surface banding, could significantly reduce losses to the environment. * Using crop rotations. The planting of legumes (peas, beans, vetch, alfalfa, and leucaena trees) on alternative years can be used to re-charge the soil with nitrogen naturally. * Increasing the use of organic fertilizers. In China, the efficient use of organic nutrients from animal wastes, compost and green manure greatly supplements the use of inorganic fertilizers. 2. Irrigation. In the United States, 13 % of agricultural energy consumption is used to pump water, primarily from groundwater sources, for irrigation. ...read more.

Studies in industrialized countries have revealed that for every calorie of food consumed, on average, 10 calories of energy are used to produce, process and package the product. For comparison sake, one unit of human labor energy expended by the traditional farming techniques results in approximately one unit of food energy for consumption. Modern energy intensive agriculture can continue to expand for perhaps several more decades. However, with depleting oil reserves, energy prices are likely to escalate to a point where their use in industrial agricutural systems will be too expensive. Several things can be done now to minimize the use of fossil fuels. Farmers can begin to use local perpetual and renewable energy sources including wind, water, sun, animal and crop wastes. Agricultural systems can also be made more energy efficient. Some studies suggest that the application of organic farming techniques can reduce energy use by more than 40 percent. ...read more.