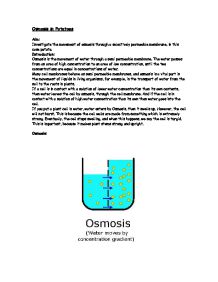 Investigate the movement of osmosis through a selectively permeable membrane, in this case potato.

Osmosis in Potatoes Aim: Investigate the movement of osmosis through a selectively permeable membrane, in this case potato. Introduction: Osmosis is the movement of water through a semi permeable membrane. The water passes from an area of high concentration to an area of low concentration, until the two concentrations are equal in concentrations of water. Many cell membranes behave as semi permeable membranes, and osmosis is a vital part in the movement of liquids in living organisms, for example, in the transport of water from the soil to the roots in plants. If a cell is in contact with a solution of lower water concentration than its own contents, then water leaves the cell by osmosis, through the cell membrane. And if the cell is in contact with a solution of high water concentration than its own then water goes into the cell. If you put a plant cell in water, water enters by Osmosis, then it swells up. However, the cell will not burst. This is because the cell walls are made from something which is extremely strong. Eventually, the cell stops swelling, and when this happens, we say the cell is turgid. This is important, because it makes plant stems strong and upright. Osmosis: Preliminary Work: For my preliminary work, I used 30mm of potato. ...read more.

This is because the solution has more water potential (its molecules' ability to move) than the potato chip, and so water moves from a region of high concentration (the solution) to a region of low concentration (the potato chip.) Method: After having done my preliminary work, I knew exactly which measurements I needed to use in order to obtain the correct results. I set up 18 test tubes, because in order to save time, we intended on doing repeats at the same time as the original experiments were going on. For organization's sake, I set up all of the test tubes at once, and labeled them separately to avoid confusion later on. Into each test tube, I poured just enough Sucrose solution to cover the potato chip, and added one of the potato chips each measuring 50mm in length. In order to make it as much of a fair test as possible, I added the potato chips very quickly, to make sure one chip didn't have a longer amount of time in the solution than another. I then left each one for 25 minutes. After 25 minutes, I emptied each test tube, leaving only the potato chips inside. I then measured the chips in mm because they are a more accurate measurement. ...read more.

The side with the greater amount sucrose molecules will have a greater amount of energy than the other due too the larger amount of molecule on one side. Therefore since the glucose molecules cannot pass through to create a balance the water molecules must. This is the water gradient being balanced. Evaluation: I had a short amount of time to complete the experimenting for this investigation so a planned out my experiments over that time to get them all completed in a short time as possible. If I had the chance I would redo my experiment with more molar ranges, like a range from 0 to 5 as an idea and do each repeat separately as too insure I didn't make the same mistake for all if I did make a mistake. By this I mean I do each repeat on a different day because if on one day 2 molar concentration seems to have been gone off and I did the experiment with out even realizing then all my repeats would give the same result making my results inaccurate and inconsistent. I, after my preliminary work, thought that the amount of solution used was not relevant because it would have no effect of the chips, the reason I did this was also due to the lack of time. If I had time I would go back and measure each solution equally to insure accuracy. ...read more.