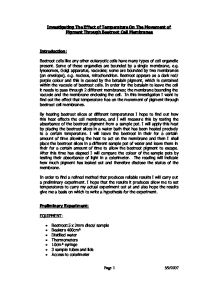 Investigating the effect of temperature on the movement of pigment through beetroot cell membranes.

Investigating The Effect of Temperature On The Movement of Pigment Through Beetroot Cell Membranes Introduction: Beetroot cells like any other eukaryotic cells have many types of cell organelle present. Some of these organelles are bounded by a single membrane, e.g. lysosomes, Golgi apparatus, vacuoles; some are bounded by two membranes (an envelope), e.g. nucleus, mitochondrion. Beetroot appears as a dark red/ purple colour and this is caused by the betalain pigment, which is contained within the vacuole of beetroot cells. In order for the betalain to leave the cell it needs to pass through 2 different membranes; the membrane bounding the vacuole and the membrane enclosing the cell. In this investigation I want to find out the effect that temperature has on the movement of pigment through beetroot cell membranes. By heating beetroot slices at different temperatures I hope to find out how this heat effects the cell membrane, and I will measure this by testing the absorbance of the beetroot pigment from a sample pot. I will apply this heat by placing the beetroot slices in a water bath that has been heated precisely to a certain temperature. I will leave the beetroot in their for a certain amount of time allowing the heat to act on the membrane and then I shall place the beetroot slices in a different sample pot of water and leave them in their for a certain amount of time to allow the beetroot pigment to escape. After this time has elapsed I will compare the colour of the sample pots by testing their absorbance of light in a colorimeter. The reading will indicate how much pigment has leaked out and therefore disclose the status of the membrane. In order to find a refined method that produces reliable results I will carry out a preliminary experiment. I hope that the results it produces allow me to set temperatures to carry my actual experiment out at and also hope the results give me a basis on which to write a hypothesis for the experiment. ...read more.

Also slices are washed for several hours after slicing to remove any excess pigment that spilt out when the cells were cut.) * Beaker 400 cm� (Large enough to place sieve containing beetroot slices in without the hazard of tipping over the hot water. Also plenty of space for the 200cm� of water within to be displaced without spilling over the edges.) * Distilled water 350 cm� (Distilled water has had any impurities removed that may effect the final reading on the colorimeter.) * Thermometer (To make sure that the temperature of the water bath is exactly what it is meant to be, in order that I produce reliable results.) * 10 cm� syringe (Produces an exact amount of water to put in the sample pots. The amounts of water cannot differ from pot to pot as this would mean the concentrations of pigment differ and this would mean the absorbance readings would be inaccurate.) * 50cm� measuring cylinder (Measures the 200cm� of water for the water bath to a relevant degree of accuracy.) * 15 sample tubes & lids (Provide an air tight space for the beetroot pigment to diffuse in over 30 minutes and allow the final solution to be shaken without any leaking out before the absorbance measurement is taken.) * Access to colourimeter set at 520nm/green (No.4 filter). (Used to measure the absorbance, which is the value I shall use to compare my results against one another. It works as the photons of light are absorbed by the betalains and the absorption of light changes.) * A small sieve (This allows the beetroot slices to all sit in the water for the same amount of time so they can be quickly removed. I found the time taken to remove the slices individually as a major source of error in my preliminary experiment.) * A stopwatch (Times exactly the time that the beetroot slices spend in the water bath and in their allocated sample pots, making the results more accurate and for the experiment to be a fait test.) ...read more.

To increase the accuracy of the data, more readings could be taken in future, perhaps 5, to again narrow down the chances of an anomaly affecting the accuracy of the results. In a future experiment I might also narrow down the range of temperatures to between 60?C and 80?C so a detailed analysis could be carried out into why there was such a sudden increase in pigment leaving the cell, and more thorough knowledge of the independent components of a beetroot membrane to help my understanding of my data. There were some limitations to the experiment. The behaviour of the membrane could only be judged by the amount of pigment that diffused out. It would be interesting to know how the membranes behaved when no pigment diffused out even though there was no change in temperature. Another limitation was that we only saw the behaviour of the membrane in water which is a non-polar substance that attracts the hydrophilic head of the phospholipid molecule. It would be interesting to see the behaviour of the phospholipid bilayer in an organic solute or alcohol, and see if they have a different effect to water. This experiment was also limited because as the beetroot cells were placed in water they became turgid as they were affected by the high water potential of the water bath. This turgidity may have put extra pressure on the membrane so it wasn't just temperature that might have affected the membranes tensile strength. I don't know how this could be overcome in future, but its effect could be incorporated into the results by carrying out a control in just room temperature water and see what effect this had on the membrane. I have pointed out the limitations of this experiment and also the positive points to it, and overall I believe the limitations didn't have a great enough combined effect to make the data inaccurate and invalid, so to conclude, this experiment was successful as it allowed me to see the effect of heat on the permeability of the membrane. Page 1 5/9/2007 ...read more.

**** A sound attempt at reporting a standard biological experiment carried out using a slightly different methodology to that usually employed.
To improve
Research and Rationale
There is a small selection of relevant sources. The research could have been extended to include a wider range of sources which could then be used to help in the interpretation of data. They could also have been used to make a quantitative prediction. The sources quoted are referenced within the text to illustrate where they have been used. There is very little irrelevant information and it is clear to the reader how the hypothesis and methods used have been developed.
Planning
The planning contains all the main elements of selection of apparatus, a fairly detailed method and sound control of variables but these were not discussed separately. It would help to include a table listing all the key variables and their methods of control. The pilot experiment was relevant and there is some evidence of its application in the planned method but a wider range of the independent variable might have been more useful. The control of the key temperature variable was not adequate in the main experiment and separate thermostatically controlled waterbaths should have been used.
There is no risk assessment other than simple statements and this would fail to gain credit under the newer guidelines.
Implementing
Results were recorded in suitable tables with clear headings but the units, (even Arbitrary units) should be clearly indicated. If results were later described as anomalous it might have been better to repeat these points. The range of values or conditions were well-matched to the investigation and a suitable number of replicates were recorded.
Analysis and evaluation
Data are processed using appropriate methods that reveal trends and patterns, and were commented on, but a test for a significant correlation should have been included. Results were interpreted using biological principles but suggestions for improving the reliability of the data were limited. The evaluation of the method and suggestions for modifications would benefit from a more extensive analysis.