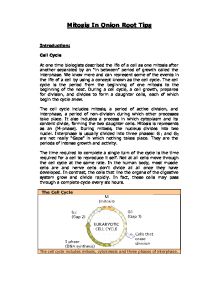 Mitosis In Onion Root Tips Introduction: Cell Cycle At one time biologists described the life of a cell as one mitosis after another separated by an "in between" period of growth called the interphase. We know more and can represent some of the events in the life of a cell by using a concept known as the cell cycle. The cell cycle is the period from the beginning of one mitosis to the beginning of the next. During a cell cycle, a cell growth, prepares for division, and divides to form a daughter cells, each of which begin the cycle anew. The cell cycle includes mitosis, a period of active division, and interphase, a period of non-division during which other processes take place. It also includes a process in which cytoplasm and its content divide, forming the two daughter cells. Mitosis is represents as an (M-phase). During mitosis, the nucleus divides into two nuclei. Interphase is usually divided into three phases: G1 and G2 are not really "Gaps" in which nothing takes place. ...read more.

The paper towel will draw the water out from under the cover slip, and the cohesion of the water (due to those perennial favorites - Hydrogen Bonds). * As soon as the stain has covered the area containing the specimen you are finished. The stain does not need to be under the entire cover slip. If the stain does not cover the area needed, get a new piece of paper towel and add more stain until it does. * Be sure to wipe off the excess stain with a paper towel, so you don't end up staining the objective lenses. 6) In the meanwhile place the watch glass on the hot plate at (500C) for about two minutes. 7) Use a compound light microscope to examine your wet preparation under low power, and then use the high power magnifications. 8) As soonest as you get a clear image of the of the onion cell, observe the development stages and draw each stage as you see them under the microscope. ...read more.

Almost immediately after the metaphase chromosomes are aligned at the metaphase plate, the two halves of each chromosome are pulled apart by the spindle procedure and migrate to the opposite spindle poles. The kinetochore microtubules shorten as the chromosomes are pulled toward the poles, while the polar microtubules elongate to assist in the separation. In telophase, the daughter chromosomes arrive at the spindle poles and are eventually redistributed into chromatin. The process of cytokinesis, where the cytoplasm is divided by cleavage, also starts sometime in anaphase and continues through telophase. After complete separation of the chromosomes and their extrusion to the spindle poles, the nuclear membrane begins to reform around each group of chromosomes at the opposite ends of the cell. The nucleoli also reappear in what will eventually become the two new cell nuclei. When telophase is complete and the new cell membrane (or wall in the case of the onion root tips) is being formed, the nuclei have almost matured to the pre-mitotic state. The final steps are completion of the total formation of a membrane between each of the new daughter cells to yield two separate new cells. ...read more.