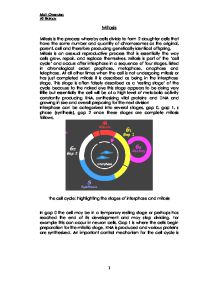 Mitosis is the process whereby cells divide to form 2 daughter cells that have the same number and quantity of chromosomes as the original, parent, cell and therefore producing genetically identical offspring.

Mitosis Mitosis is the process whereby cells divide to form 2 daughter cells that have the same number and quantity of chromosomes as the original, parent, cell and therefore producing genetically identical offspring. Mitosis is an asexual reproductive process that is essentially the way cells grow, repair, and replace themselves. Mitosis is part of the 'cell cycle' and occurs after interphase in a sequence of four stages, listed in chronological order: prophase, metaphase, anaphase and telophase. At all other times when the cell is not undergoing mitosis or has just completed mitosis it is described as being in the interphase stage. This stage is often falsely described as a 'resting stage' of the cycle because to the naked eye this stage appears to be doing very little but essentially the cell will be at a high level of metabolic activity constantly producing RNA, synthesizing vital proteins and DNA ...read more.

At the end of this occurs another control checkpoint to determine whether or not the cell can enter mitosis and divide to produce to daughter cells. Following Interphase the cell enters the first stage of the mitotic process, known as prophase. The Process as whole is much shorter in comparison to Interphase and by this stage much of the cells common functions have stopped and attention within the cell is centred on the division. In prophase chromosomes become visible; the nucleolus fades and chromatin (replicated DNA and associated proteins) condense to form chromosomes. Chromosomes consist of two chromatids comprising of the same genetic information repeated twice in coils of DNA and centromeres -the central point on the chromosomes that connects each chromatid together to form a chromosome. Centrioles that divided during Interphase form spindle fibres long chains of microtubules that 'latch' onto each centromere. ...read more.

The final stage of mitosis is telophase where the daughter chromosomes reach each pole of the cell and uncoil with the reformation of a nuclear envelope forming around each bundle. They now become 'invisible' again and the spindle fibres disintegrate, and a nucleolus reforms in each new nucleus. Cytokinesis, the actual division of the cell can be preformed by most animal cells can perform mitosis however only a specialised group of cells can do so in plants these are known as meristematic cells In animal cells cytokinesis occurs by the constriction of the centre of the parent cell from outside inwards. In plant cells this differs by the growth of a cell plate that forms across the equator of the cell. It is formed from the vesicles produced by the dictyosome or golgi apparatus. Cellulose then form over this plate to create the beginnings of a cell wall a characteristic that is quite obviously absent in animal cells. Matt Ovenden AS Biology 1 ...read more.