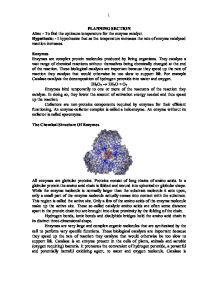 Reaction of Catalase and Hydrogen Peroxide

PLANNING SECTION Aim: - To find the optimum temperature for the enzyme catalyst. Hypothesis: - I hypothesize that as the temperature increases the rate of enzyme catalysed reaction increases. Enzymes Enzymes are complex protein molecules produced by living organisms. They catalyse a vast range of chemical reactions without themselves being chemically changed at the end of the reaction. These biological catalysts are important because they speed up the rate of reaction they catalyse that would otherwise be too slow to support life. For example Catalase catalysis the decomposition of hydrogen peroxide into water and oxygen. 2H2O2 ? 2H2O + O2 Enzymes bind temporarily to one or more of the reactants of the reaction they catalyse. In doing so, they lower the amount of activation energy needed and thus speed up the reaction. Cofactors are non-proteins components required by enzymes for their efficient functioning. An enzyme-cofactor complex is called a holoenzyme. An enzyme without its cofactor is called apoenzyme. The Chemical Structure Of Enzymes All enzymes are globular proteins. Proteins consist of long chains of amino acids. In a globular protein the amino acid chain is folded and wound into spherical or globular shape. While the enzyme molecule is normally larger than the substrate molecule it acts upon, only a small part of the enzyme molecule actually comes into contact with the substrate. This region is called the active site. Only a few of the amino acids of the enzyme molecule make up the active site. These so-called catalytic amino acids are often some distance apart in the protein chain but are brought into close proximity by the folding of the chain. Hydrogen bonds, ionic bonds and disulphide bridges hold the amino acid chain in its distinct three-dimensional shape. Enzymes are very large and complex organic molecules that are synthesized by the cell to perform very specific functions. These biological catalysts are important because they speed up the rate of reaction they catalyze that would otherwise be too slow to support life. ...read more.

So in more time less oxygen was collected The third limitation I believe was the less range of temperatures, which I took for the experiment. I believe that if I had taken more range of temperatures with out regular intervals, I would have gotten more accurate optimum temperature. Reliability And Accuracy I believe that my results are reliable and though not completely accurate. This is because the majority of my results are the way the should be i.e. to say that the rate of reaction increases with temperature; works best at an optimum temperature; and then the rate of reaction decreases as the temperature is increased. Though they are reliable I won't say that they are completely accurate. This is because the graph curves are not completely smooth as they should be. Variability Though my results are reliable they are not 100% accurate. This I can say because the results, which I have obtained, are not the same they varied. For example for the temperature of 25 ?C, when I did the experiment thrice I got three different results. These are 3.4ml, 3.8ml and 3.5ml. They are not the same because there must have been some personal error. Improvements The following are the improvements I will be doing if I carried out the experiment again. The first improvement will be that I will use a permanent set-up instead of the set-up, which I had used. So that time is not wasted while inverting the measuring cylinder due to which some oxygen molecules would have been lost. Second improvement will be doing is the usage a shorter delivery tube instead of long delivery tube. So that oxygen can easily be collected in the measuring cylinder. The third improvement I will like to do is take greater range of experiment instead of taking the temperatures of fixed regular intervals. This is will give me more better results as I will have more range of results. ...read more.