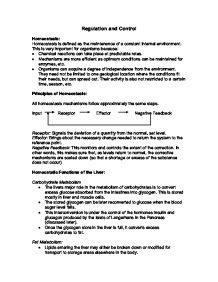 Regulation and Control Homeostasis: Homeostasis is defined as the maintenance of a constant internal environment. This is very important for organisms because: * Chemical reactions can take place at predictable rates. * Mechanisms are more efficient as optimum conditions can be maintained for enzymes, etc. * Organisms can acquire a degree of independence from the environment. They need not be limited to one geological location where the conditions fit their needs, but can spread out. Their activity is also not restricted to a certain time, season, etc. Principles of Homeostasis: All homeostasis mechanisms follow approximately the same steps. Input Receptor Effector Negative Feedback Receptor: Signals the deviation of a quantity from the normal, set level. Effector: Brings about the necessary change needed to return the system to the reference point. Negative Feedback: This monitors and controls the extent of the correction. In other words, this makes sure that, as levels return to normal, the corrective mechanisms are scaled down (so that a shortage or excess of the substance does not occur) Homeostatic Functions of the Liver: Carbohydrate Metabolism * The livers major role in the metabolism of carbohydrates is to convert excess glucose absorbed from the intestines into glycogen. This is stored mostly in liver and muscle cells. * The stored glycogen can be later reconverted to glucose when the blood sugar level falls. * This interconversion is under the control of the hormones insulin and glucagon produced by the Islets of Langerhans in the Pancreas (discussed later). * Once the glycogen store in the liver is full, it converts excess carbohydrates to fat. ...read more.

* The invagination contains a dense network of capillaries called the glomerulus. * Blood flows into the glomerulus through the afferent vessel, and leaves it through the efferent vessel. The efferent vessel is considerably narrower than the afferent vessel. Blood flows from the efferent vessel into a network of capillaries, which finally ends in the renal vein. * Leading from the Bowman's capsule is a tubule, which divides into three sections. 2. Proximal Convoluted Tubule: * This is the longest part of the tubule and is highly coiled. * It is well supplied with blood capillaries. 3. Loop of Henle: * This is U shaped, with a descending limb and an ascending limb. * It descends from the cortex to the medulla and then back into the cortex again. 4. Distal Convoluted Tubule: * This is coiled and leads into one of the collecting ducts. 5. Collecting Ducts: * The collecting ducts carry urine down into the pelvis of the kidney * This drains into the ureter which carries the urine down into the bladder. * Leading from the bladder is a tube called the urethra which carries urine to the outside. Functioning of the Nephron: The functioning of the Nephron involves two main stages Ultrafiltration: * Ultrafiltration is filtration under pressure. * The filtrate from the Bowman's capsule is identical to blood plasma except for the fact that it does not contain plasma proteins. * Filtration of the plasma occurs because the pressure inside the glomerulus is high. This forces filtration of the blood into the Bowman's capsule. ...read more.

* NOTE: The change in potential across the membrane, resulting initially from the local currents at the leading end of the action potential, causes specific protein channels to open up in the membrane through which the ions readily pass. This is why sodium ions can enter the axon easily during the passage of an impulse. * Depolarization of the membrane corresponds to the rising phase of the action potential, repolarization to the falling phase. * After an axon has transmitted an impulse it is impossible for it to transmit another for a short period. The reason is that after it has been active the axon has to recover, ionic movements have to occur and the membrane has to be repolarized before another action potential can be transmitted. This period is called the refractory period. Synapses: * Synapses link one nerve cell to another. * When an impulse arrives at a synaptic knob it alters the permeability of the presynaptic membrane to calcium ions by opening channel proteins which allow the entrance of Ca+2 ions. * The influx of these ions causes synaptic vesicles containing acetylcholine to move towards the presynaptic membrane. * The synaptic vesicles discharge their contents, the transmitter fluid acetylcholine into the synaptic cleft. * Acetylcholine diffuses across the cleft and attaches to specific sites on the post-synaptic nerve cell so that a positive charge develops on that part of the cell. * When this positive charge builds up to a critical level, an action potential is generated in the nerve cell. * Once acetylcholine has done its job, it is broken down by an enzyme cholinesterase. * Synapses ensure that impulses travel in only one direction as synaptic vesicles are present only at the presynaptic membrane. ...read more.