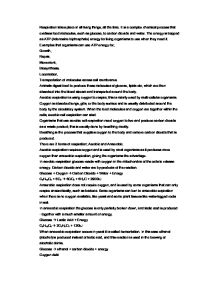 Respiration. There are 2 forms of respiration; Aerobic and Anaerobic.

Respiration takes place in all living things, all the time. It is a complex chemical process that oxidises food molecules, such as glucose, to carbon dioxide and water. The energy is trapped as ATP (Adenosine triphosphate) energy for living organisms to use when they need it. Examples that organisms can use ATP energy for; Growth, Repair, Movement, Biosynthesis, Locomotion, Transportation of molecules across cell membranes. Animals digest food to produce these molecules of glucose, lipids etc, which are then absorbed into the blood stream and transported around the body. Aerobic respiration is using oxygen to respire; this is mainly used by multi-cellular organisms. Oxygen is absorbed lungs, gills, or the body surface and is usually distributed around the body by the circulatory system. ...read more.

Soon a point is reached when the body cannot breathe any faster or harder, and aerobic respiration alone cannot meet the enhanced energy demands. So muscle cells get the extra energy they need by respiring anaerobically. Anaerobic respiration produces lactic acid, which accumulates in the muscles and causes muscle fatigue and cramps. To avoid damage to the cells, lactic acid is broken down to carbon dioxide and water immediately after the exercise has finished. This is an oxidisation reaction, and requires oxygen. This extra oxygen needed to neutralise the harmful effects of anaerobic respiration is called an oxygen debt. In order to get the extra oxygen to 'pay back' the debt, the body continues to breathe deeply for some time after vigorous activity has ceased. When all the lactic acid in the muscles is broken down the oxygen debt has been repaid and normal aerobic respiration resumes. ...read more.