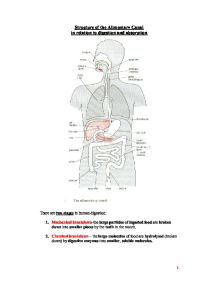 Structure of the Alimentary Canal in relation to digestion and absorption

Structure of the Alimentary Canal in relation to digestion and absorption There are two stages in human digestion: 1. Mechanical breakdown-the large particles of ingested food are broken down into smaller pieces by the teeth in the mouth. 2. Chemical breakdown - the large molecules of food are hydrolysed (broken down) by digestive enzymes into smaller, soluble molecules. The alimentary canal (human gut) has the same general structure along its whole length but in some areas, it is specialised to carry out various roles. It extends as a tube from the mouth to the anus and along its length, the wall is composed of four layers: 1. Mucosa- This is the innermost lining of the gut wall. It lubricates the passage of food with mucus and also protects it from the digestive action of enzymes. The mucosa surrounds the lumen which is made up of glandular epithelium and connective tissue containing blood vessels and lymph vessels. ...read more.

An illustration of peristalsis is shown by the diagram on the right. From here, chemical digestion takes place and complex organic molecules are broken down in stages until simple, smaller soluble molecules are formed which can then be absorbed. There are three major groups of digestive enzymes involved: * Carbohydrases- these hydrolyse the glycosidic bonds in carbohydrates * Proteases- these hydrolyse the peptide bonds in proteins and polypeptides * Lipases- these hydrolyse the ester bonds in triglycerides Carbohydrases The carbohydrate from the food is mainly in the form of polysaccharides so needs to be digested. Carbohydrate digestion occurs in the mouth, duodenum and ileum under alkaline conditions(above pH 7). In the mouth, at pH 7.0, salivary amylase hydrolyses carbohydrates into short chain glucose residues and some maltose. In the duodenum, at pH 7.0, the pancreatic amylase hydrolyses the starch in the carbohydrates to maltose. In the ileum, at pH 8.5, the enzymes, maltase, lactase and sucrase from cells in the mucosa of the small intestine, hydrolyse the maltose in the carbohydrates to glucose, the lactose to glucose and galactose and the sucrose to glucose and fructose. ...read more.

Absorption and Histology of the Ileum Wall The final stages of digestion of carbohydrates, lipids, and proteins take place in the duodenum and ileum and at the same time the process of absorption is occurring. This part of the gut has several features which contribute to the efficiency of absorption: * It is long which provides a large surface area for efficient absorption * The large numbers of finger-like projections known as villi, in the mucosa increase the surface area for absorption * The villi contain smooth muscle fibres which contract and relax, mixing up the contents of the ileum and bringing the epithelial cells of the absorptive surface into greater contact with digested food * The epithelial cells possess microvilli to further increase the surface area for absorption * Each villus has a large capillary network so that absorbed food is transported very quickly which maintains the concentration gradient * Lymph vessels take away absorbed glycerol and fatty acids to join the lymphatic system * A moist lining helps substances dissolve so they can pass through cell membranes ?? ?? ?? ?? 1 ...read more.