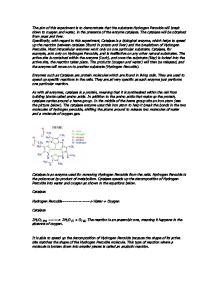 The aim of this experiment is to demonstrate that the substrate Hydrogen Peroxide will break down to oxygen and water, in the presence of the enzyme catalase.

The aim of this experiment is to demonstrate that the substrate Hydrogen Peroxide will break down to oxygen and water, in the presence of the enzyme catalase. The catalase will be obtained from peas and liver. Specifically, with regard to this experiment, Catalase is a biological enzyme, which helps to speed up the reaction between catalase (found in potato and liver) and the breakdown of Hydrogen Peroxide. Most intracellular enzymes work only on one particular substrate. Catalase, for example, acts only on Hydrogen Peroxide, and is ineffective on any other natural substrates. The active site is contained within the enzyme (Lock), and once the substrate (Key) is locked into the active site, the reaction takes place. The products (oxygen and water) will then be released, and the enzyme will move on to another substrate (Hydrogen Peroxide). Enzymes such as Catalase are protein molecules which are found in living cells. ...read more.

The reaction is an anaerobic one, meaning it happens in the absence of oxygen. It is able to speed up the decomposition of Hydrogen Peroxide because the shape of its active site matches the shape of the Hydrogen Peroxide molecule. This type of reaction where a molecule is broken down into smaller pieces is called an anabolic reaction. Catalase has to be very fast acting to keep the hydrogen peroxide levels low and it is one of the fastest acting enzymes known. Speed of action of an enzyme is expressed as its turnover number. This is the number of substrate molecules which one molecule of the enzyme turns into products per minute. Catalase has a turnover number of 6 million and is one of the fastest enzymes. It catalyses the decomposition of hydrogen peroxide, liberating oxygen gas as effervescence, each molecule of the globular protein decomposing 40,000 molecules of hydrogen peroxide per second at zero degrees Celsius and capable of producing an amazing 1012 molecules of oxygen per second. ...read more.

Non-specialized peroxisomes are a third group, which are found in other tissues. The optimum pH at which Catalase can work is 7.0. Freezing can also cause inactivation, and Catalase can also be inactivated by sunlight under aerobic conditions. Catalase catalyses conversion of H2O2 to oxidize toxins including: Phenols, formic acid, formal dehyde and alcohols. Catalase can be stored at 2-8 o c; preparations are stable for 12 months when stored at 5 o c. Tests for Catalase and its presence: The action of Catalase can be demonstrated by placing a small sample of liver into a beaker containing hydrogen peroxide. If it fizzes, this indicates that oxygen is being given off; it is a dramatic demonstration of an enzyme in action. Finely divided platinum or Iron filings also speed up the decomposition of hydrogen peroxide but experimenting with a piece of liver will give a higher volume of oxygen as it rich in catalases. This enzyme achieves greater activation energy than can be brought about by inorganic catalysts. ...read more.