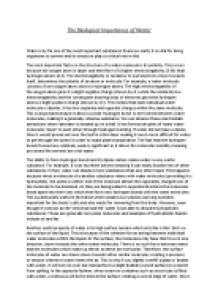 ﻿The Biological Importance of Water Water is by far one of the most important substances found on earth; it is vital for living organisms to survive and its structure plays a critical role in this. The most important factor in the structure of a water molecule is its polarity. This occurs because the oxygen atom is larger and therefore of a higher electronegativity (3.44) than hydrogen atoms (2.2). The electronegativity or tendency to pull electrons closer towards itself, determines the polarity of an atom or molecule. For example, a water molecule consists of one oxygen atom and two hydrogen atoms. The high electronegativity of the oxygen atom gives it a slight negative charge (shown by ?-) while the relatively low electronegativity and the consequent drawing away of electrons gives the hydrogen atoms a slight positive charge (shown by ?+). This means that each individual water molecule is dipolar, it has two separate and opposite charges within the same molecule. This is important because it allows a weak ?hydrogen bond? to be formed between water molecules, making it a generally cohesive substance. We can observe these electrostatic attractions when rainwater is beaded up on a leaf. It has formed droplets of many water molecules ?stuck? to each other through hydrogen bonding. ...read more.

to prevent from spilling. In the opposite fashion, when a narrow container such as a test tube is filled with water, a meniscus will be formed at the surface creating a curved edge of water. More useful examples of water?s surface tension include several species of insect and even reptile being able to effectively walk on water creating a whole new ecosystem on the surface of water masses such as ponds. Similarly, the cohesion of water molecules pulling together creates ?capillary action?. Capillary action or capillarity is when a small amount of water is pulled up through a narrow space, even though this sometimes means counteracting the force of gravity as in the example of a pipette or straw. This occurs because the adhesion forces between the water and glass molecules attract the first water molecules to the sides of the tube. The cohesive forces between the water molecules then attract more water upwards and this process continues until the gravitational force is too strong. Because of this property, water can travel along very narrow veins in roots and leaves much more easily than if it did not exist. Also largely due to the hydrogen bonds in water, it has a relatively high boiling point and specific heat capacity. ...read more.

In addition, if all the ice caps in the North Pole were to sink, the amount of water that would be displaced would entirely engulf all land. Another important feature of the water molecule is that it?s an amphiprotic molecule meaning that it can both accept protons and be a proton donor. Therefore, in any amount of pure water or aqueous solution, water molecules can rearrange themselves by losing a hydrogen nucleus to form a hydroxide ion (OH-) and a free proton (H+), of which the proton will then react with another water molecule to form hydronium (H3O). In other words, the dynamic equilibrium equation for the autoionization of water is: 2H2O ?? H3O+ + OH-. This characteristic makes water a good regulator of pH which is especially useful in cells alongside ongoing reactions. Importantly, water is also transparent so living organisms are able to see through it. This is another factor making marine ecosystems possible and it also allows vision through the tears (saline solution) in our eyes. Conclusively, the properties of water, due in large to its molecular structure, is what makes it possible for any form of life to survive. It sustains living organisms and balances systems both to create a suitable environment for life and with the organisms themselves, regulating specific variables like pH, temperature and, obviously, water content. ...read more.

The opening of this essay is exceptional, and there are some really good points throughout. The student provides a fantastic level of detail, and shows he has done some extra reading beyond the syllabus.

Unfortunately later parts of the essay are a little less clear (the sections on specific heat capacity, and latent heat of vaporisation could be better written) and spends too long discussing the surface tension / cohesion properties conferred by hydrogen bonding.

It would also be nice to have a little bit about water's role within metabolism (in hydrolysis) and its supporting roles (e.g. as hydroskeletons).