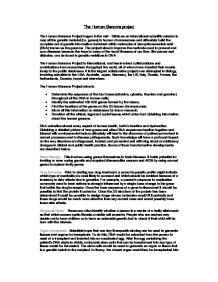 The Human Genome project The Human Genome Project began in the mid - 1980s as an international scientific mission to map all the genetic material (i.e. genes) in human chromosomes and ultimately build the complete set of genetic information contained within molecules of deoxyribosenucleic acid (DNA) known as the genome. The project aims to improve the methods used to prevent and cure diseases because the keys to many of the worst illnesses of our time, like cancer and diabetes, can be found in genetic variations in DNA. The Human Genome Project is international, and has involved collaborations and contributions from researchers throughout the world, all of whom have donated their results freely to the public databases. It is the largest collaborative project ever attempted in biology, involving scientists in the USA, Australia, Japan, Germany, the UK, Italy, Russia, France, the Netherlands, Canada, Israel and elsewhere. The Human Genome Project aims to: * Determine the sequence of the four bases (adenine, cytosine, thymine and guanine) ...read more.

Drug therapies - Prior to starting any drug treatment, a person's genetic profile might indicate which type of medication is most likely to succeed and which should be avoided because of a tendency to side effects due to genetics. For example, a person's response to medication commonly used to treat asthma is strongly influenced by a single base change in the gene that builds the drug's receptor. Once the base sequence of a gene is discovered it should be possible to find the protein it codes for. Once the 3D structure of the protein has been determined it could be possible to design drugs whose molecules would fit it perfectly and these drugs would be much more effective than any current ones and would possibly have fewer side effects. Diagnostic tests - These can often identify whether a person is a carrier of a faulty allele such as that which causes cystic fibrosis or sickle cell anaemia. ...read more.

Scientists know that genetic differences make some people more susceptible and others more resistant to such agents. Far more work must be done to determine the genetic basis of such variability. This knowledge will be used to try to understand the effects of low-level exposures to radiation and other energy-related agents, especially in terms of cancer risk. Although there could be great benefits in human health and disease, some people are not happy with the work being done on the Human Genome Project and say its unethical and that the money could be better spent on other things like improving the health of very poor people that probably won't benefit from the project and who will continue to be vulnerable to infectious diseases. Although tests for diseases such as cystic fibrosis are useful because they provide information on whether people are carries of the disease or not, the results generated from it may not be reliable. Also it could introduce risks of discrimination by employers, insurance companies and others if they discover whether or not someone has had a positive result for a particular faulty gene. ...read more.