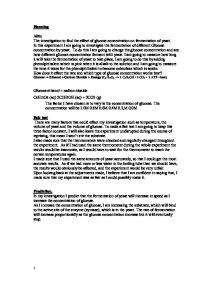 The investigation to find the effect of glucose concentration on fermentation of yeast.

Glucose is eventually split in 2 molecules of pyruvate. ATP is needed for this, however ATP is released in later stager. There is a net gain of two ATP molecules per glucose molecule. (OCR Biology 2 chapter 1 A2) Enzymes: Organic Catalysts Enzymes allow many chemical reactions to occur within the homeostasis constraints of a living system. Enzymes function as organic catalysts. A catalyst is a chemical involved in, but not changed by, a chemical reaction. Many enzymes function by lowering the activation energy of reactions. By bringing the reactants closer together, chemical bonds may be weakened and reactions will proceed faster than without the catalyst. (OCR Biology 1 chapter three AS) Space filling model of an enzyme working on glucose. Note the shape change in the enzyme (indicated by the red arrows) after glucose has fit into the binding or active site. Factors Affecting Enzyme Action The activity of enzymes is strongly affected by changes in pH and temperature. Each enzyme works best at a certain pH (left graph) and temperature (right graph), its activity decreasing at values above and below that point. This is not surprising considering the importance of. As I have stated in my definition, enzymes are highly specific. This is because the active site of an enzyme is an inverse copy of the shape of the substrate molecules it is designed for. This means no other substrate molecules are able to join with the enzyme molecule. This idea of enzyme - substrate rigidity is known as the lock and key hypothesis, meaning only the correct 'key' (substrate) will work the 'lock' (enzyme.) The diagram below shows how the enzyme will only accept certain substrate molecules. Only molecule E is the correct shape. The enzyme does not however, stay in one shape. It is flexible, allowing the substrate to maneuver into place before taking its shape for catalysing the substrate. ...read more.

And it is also extremely reliable; the values obtained from my statistical test shows 99. % Confident, this shows that the anomalous results are very low. I also found that the rate of respiration gradually increased, before it reached its greatest point (peak), and that the yeast has respired. The color change slowly continues to be put out, and a total color change has taken place. My results seem to back up this proposal. Main source of error. * The yeast that I used was prepared exactly before the experiment was carried; if the yeast were left too long it would asexually reproduce. And the yeast would contain more enzymes, which would make the experiment much faster, which would produce an anomalous result. * Yeast that I used in my experiment was a yeast that was prepared just before I started to carry out the experiment, by the time I was on the middle of the experiment the yeast has reproduced sexually, and extra enzymes were present in the yeast which meant that the experiment were much faster then some of the first test that I took. Making a newly made yeast every 30 minutes meant that the experiment were kept to minimal anomalous results, and the results were mostly at the same rate. The yeast culture was not shaken at the beginning therefore the yeast might not be spread out through out the culture. Validity of conclusion. The results that obtained were reliable enough for me to give a 40C, within which the true value of the temperature at which the yeast respires best at, despite the very large source of error in this experiment, I am confident that the specific temperature for the yeast to respire at lies within this range. This is because I plotted the mean value of a class of twelve students, and then I plotted I mean value of a class of my experiment. The spearman's test that calculated for my figures was not too large it showed 99. % Accurate. [RM1] 1 ...read more.