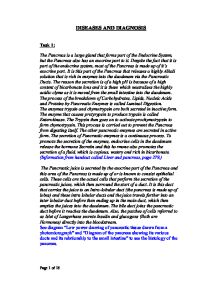 The Pancreas is a large gland that forms part of the Endocrine System, but the Pancreas also has an exocrine part to it.

DISEASES AND DIAGNOSIS Task 1: The Pancreas is a large gland that forms part of the Endocrine System, but the Pancreas also has an exocrine part to it. Despite the fact that it is part of the endocrine system, most of the Pancreas is made up of it's exocrine part. It is this part of the Pancreas that releases a highly Alkali solution that is rich in enzymes into the duodenum via the Pancreatic Ducts. The reason the secretion is of a high pH is because of a high content of bicarbonate Ions and it is these which neutralises the highly acidic clyme as it is moved from the small intestine into the duodenum. The process of the breakdown of Carbohydrates, Lipids, Nucleic Acids and Proteins by Pancreatic Enzymes is called Luminal Digestion. The enzymes trypsin and chymotrypsin are both secreted in inactive form. The enzyme that causes protyrypsin to produce trypsin is called Enterokinase. The Trypsin then goes on to activate prochymotrypsin to form chymotrpysin. This process is carried out to prevent the Pancreas from digesting itself. The other pancreatic enzymes are secreted in active form. The secretion of Pancreatic enzymes is a continuous process. To promote the secretion of the enzymes, endocrine cells in the duodenum release the hormone Secretin and this hormone also promotes the secretion of a fluid, which is copious, watery and rich in bicarbonate. (Information from handout called Liver and pancreas, page 279.) The Pancreatic juice is secreted by the exocrine part of the Pancreas and this area of the Pancreas is made up of or is known to consist epithelial cells. These cells are the actual cells that perform the secretion of the pancreatic juices, which then surround the start of a duct. It is this duct that carries the juice to an Intra-lobular duct (the pancreas is made up of lobes) and these intra lobular ducts and the juice travels further into an inter lobular duct before then ending up in the main duct, which then empties the juices into the duodenum. ...read more.

One reason for this could be a problem with the starch, as the mixture in the tray wouldn't star at Blue-Black no matter how many times I tried it. Advantages & Disadvantages: I found this test to have no real advantages as any results obtained are speculative and it is extremely difficult to determine an 'end point' of Brown. To establish a proper end point would probably be to time consuming anyway. Test 2 - Plasma Amylase Changing From Blue To Clear: Step 1 - Firstly I added 10cm3 of Starch to a boiling tube *Step 2 - I then added 2 drops of Iodine to the starch to produce a Blue-Black colour Step 3 - I then added 1cm of an Amylase sample and mixed it together. Step 4 - I then started the stop clock Step 5 - I waited until the contents of the test tube became clear, stopped the clock and noted the time. *Modification - Adding the Iodine produces the Blue colour mentioned on the task sheet, however it says nothing about adding the Iodine Test 2 - Plasma Amylase Changing From Blue To Clear (Continued): Results: At first it was impossible to reach an end point of clear because there was no blue colour to start with. I then decided to modify the method slightly by adding the Iodine to obtain the blue colour. After applying this modification, I managed to carry out the experiment reasonably well, but the end point is again, open to interpretation, however I did find it easier to carry out this test instead of Test 1. Advantages & Disadvantages: The advantage of this test is that it is less time consuming then Test 1 and is also a lot easier to carry out. The test itself is pretty easy to perform. The disadvantage however is that again the end point is open to subjectivity because what some people will say is clear, others will say it is not, but it is possible to obtain a result. ...read more.

Another example of this is when testing plasma amylase, as I had to observe another colour change, where the quicker the change the higher the severity of the disease. At times I found it difficult to determine the end point. My techniques had limitations (which I have described above). However, when these tests are carried out in a clinical lab, both the tests and data that they give are more superior to mine. The main reasons for this is that the results that you obtain from the tests carried out in a clinical lab give quantitative results. There is a 'normal' range of the amount of amylase that a person that is not suffering from pancreatitis has. This range is 70- 235U/L. A person who is suffering from pancreatitis exceeds this range and their levels of amylase can go up to 250- 4200U/L. In a clinical laboratory the length of the test is longer then mine, and also the results are quantitative whereas my results are qualitative. A normal person's values for a faecal fat test are 7g/24h whereas a pancreatitis patients values of faecal fat are greater than 15g/24h and Because these are quantitative results, they are far superior to mine. Task 7: These days, there are many ways of diagnosing Pancreatitis and I have chosen to describe one of them below: Trypsin Based Tests: Several different tests have been developed that looks at the levels of trypsinogen in the plasma or urine. Immunoreactive trypsinogen (use antibodies for trypsinogen to detect the enzyme) tests are done on plasma. A 'dipstick' for testing urine for trypsinogen has now been developed.1 Trypsin in the faeces is measured by using digestion of gelatine on X- Ray film. 5g of faeces are needed and pancreatitis is diagnosed if the test is positive at a dilution of ?1/10.5 Trypsin in the faeces can also be measured using spectrophotometry. However, decreased levels are not obvious until ?95% of the pancreas has been destroyed2. ?? ?? ?? ?? Page 1 of 18 ...read more.