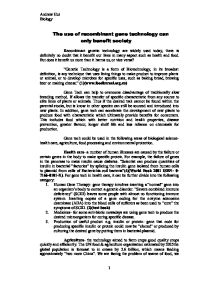 The use of recombinant gene technology can only benefit society

The use of recombinant gene technology can only benefit society Recombinant genetic technology are widely used today, there is definitely no doubt that it benefit our lives in many aspect such as health and food. But does it benefit us more than it harms us, or vice versa? "Genetic Technology is a form of Biotechnology, in its broadest definition, is any technique that uses living things to make product to improve plants or animal, or to develop microbes for specific uses, such as baking bread, brewing beer or making cheese." (1)(www.foodbureal.org.au) Gene Tech can help to overcome disadvantage of traditionally slow breeding method. If allows the transfer of specific characteristic from any source to elite lines of plants or animals. Thus if the desired trait cannot be found within the parental stocks, but is know in other species can still be sourced and introduced into new plants. In addition, gene tech can accelerate the development of new plants to produce food with characteristic which ultimately provide benefits for consumers. This includes food which with better nutrition and health properties, disease prevention, greater flavour, longer shelf life and less reliance on chemicals for production. Gene tech could be used in the following areas of biological science- health care, agriculture, food processing and environmental protection. Health care- a number of human illnesses are caused by the failure or certain genes in the body to make specific protein. ...read more.

Enable plants to produce pharmaceutical substances, such as edible vaccines 8. Creating better quality crops, e.g. more juicy and tasty 9. Speed up the growing time 1996 1997 1998 1999 2000 2001 2002 Herbicides-tolerant 23 54 71 71 74 77 75 Insect-resistance 37 31 28 22 19 15 17 Virus-resistance 40 14 <1 <1 <1 <1 <1 Bt/herbicide tolerant - <1 1 7 7 8 8 Table 1 Area of generically modified crops by trait (%) (3)(Biological Science Review #16) Little fact: The above table shows the global trend of GM crop are having more herbicides tolerant crops than others. Food processing- by gene tech, we could meet our consumer demand more easily. We could tailor our food product with greater nutrition value and health benefits; food that afford cardiovascular protection, assist digestion, protect against cancers and reduce allergenicity. Nevertheless, gene tech could be used to breed animals with certain desired characteristic, i.e., better food texture, producing more milk, grow larger in size, all of these characteristic are wanted by human for better food quality. Environmental protection- we could also use gene tech to improve the efficiency of using scarce resources or non-renewable resource, therefore to protect the globe. For example, using fertilizers that contain GM plants or animals, which would defiantly be more efficient in farming, then we could use less water and land. ...read more.

Since the genetic modifications could involve resistance to herbicides, these plants could become "superweeds" that we could not control. (2) 3. Population of transgenic organisms could upset the balance of nature- Populations or transgenic salmon have been produced in which individuals grow rapidly. These transgenic fish could compete for food with other fish species. The latter could become extinct and natural food web could change. (2) 4. Potential loss of gene- If GM plants or animal technology, if only the desirable gene is being reproduced, after a few generation, there will be a loss of gene, which lead to a less variation in offspring. 5. Potential loss of balanced Eco System- If GM plants are modified for pests resistance, where plants suppose to be producer in food chain. If pests, 1st consumer, lose its food source and decrease it number, the 2nd consumer would lack of food and decrease in number too. This would create a domino effect along the food chain, and lead to a lost of balance in Eco System. To conclude, recombinant gene technology does benefit us in much aspect, but we have to remember that the technology could harm us very seriously too. We have to be very careful with the use of it, and should not abuse it. There be could law set to regulate the use of the technology to protect mankind from the unimaginable catastrophe. ?? ?? ?? ?? Andrew Hui Biology 1 ...read more.