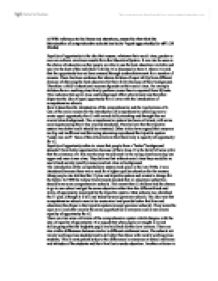 a) With reference to the Items and elsewhere, assess the view that the introduction of comprehensive schools has led to &quot;equal opportunity for all&quot;. (14 Marks)

a) With reference to the Items and elsewhere, assess the view that the introduction of comprehensive schools has led to "equal opportunity for all". (14 Marks) Equality of opportunity is the idea that anyone, whatever their social class, gender or race can achieve maximum results from the Education System. It can also be seen as the choice of education so that people are able to use the best education available and use it to the best of the individual's ability. It is discussed in Item F, where it is said that the opportunity has not been ensured through underachievement for a number of reasons. There has been evidence that shows children of equal ability have different chances of obtaining the best education for their ability because of their background. Therefore a child's educational success depends on their social class. For example children from a working class family perform worse than is expected from IQ tests. This indicates that social class and background affect achievement and therefore disproves the idea of equal opportunity for all even with the introduction of comprehensive schools. Item G describes the introduction of the comprehensive and the implications of it. One of the main reasons for the introduction of comprehensive schooling was to create equal opportunity for all with mixed ability teaching and through this not reward class background. The comprehensive system has been criticised, with some sociologists saying that it has lowered standards. They believe that the tripartite system was better and it should be reinstated. Other critics have argued that many are too big and inefficient and that using streaming reproduced the tripartite system "under one roof". None of the critics believe that there truly is equality of opportunity for all. Equality of opportunity refers to views that people from a "better" background shouldn't have better opportunities because of their class. It is the belief of some critic that the existence of a true meritocracy would result in the ruling class becoming less upper and more lower class. ...read more.

These labels could be "bright", "able", "thick", "less able", "practical" or "academic". However, these labels vary from pupil to pupil and teacher to teacher. The self-fulfilling prophecy is a statement about a pupil which in turn makes that out come true because of the statement. The concept is obviously closely linked to labelling and is used particularly in the education system. The self-fulfilling prophecy is argued by making a prediction or statement, for example "these pupils will do well because they are brightest in the class". Those in the position of influence will act as though the prediction was already true, the teachers would have high expectations of the pupils and in turn interact with them differently. Therefore reinforcing the label and making it happen. A criticism of the self-fulfilling prophecy is that is it wholly based on the judgements of teachers, ad every teacher isn't going to have the judgements and labels. This is based on the stereotypical view of teachers. These usually result in the labelling of pupils. Teaching methods have changed over the years and this means there are less judgements being made by teachers and they are more varied than described. Another criticism of it is that saying someone is intelligent or less able doesn't make it so and how are teachers supposed to assess pupils without giving them labels. A pupil's intelligent is fully dictated by teachers' labels. It relies on how they socialise and are interacted with. Different teachers will interact with pupils differently. They might also act on labels with opposite affect, for example giving the less able students more time and disproving the idea of a self-fulfilling prophecy. There is an assumption that all pupils will react in the same way to the label they have been given and how the teachers treat them. Everyone is different and they respond in different ways. Hargreaves (1975) argued whether a label "sticks" or not depends on a number of different factors. ...read more.

Some people believe that is due to intelligence, but this would imply that the children are making slow progress because of their background. This is technically r****t so it isn't agreed by most sociologists. Other explanations for the poor progress at school are the class room interactions, culture and other factor relating to culture such as culture capital or the hidden curriculum. Cultural differences and deprivation is the most likely cause from this. The children will probably have different religious beliefs, eat different food, have different beliefs from the majority of their peers. The education system is aimed at white culture through what is taught about religions and different countries. This makes it harder for students from different cultures to succeed as well as those from the dominant culture. They make poor school progress because they have a different culture than that of the school. Some will experience cultural and material deprivation as experienced by the working classes. They won't have the same access to books, computers or other learning resources. They may also have a difficult family life, such as being brought up by a single parent, which gives them a disadvantage. Having said this, cultural differences aren't the same as cultural deprivation. You may have a different cultural but it doesn't make it deprived. Although many sociological explanations have been offered to explain the poor school progress made by West Indian and Asian children. It is unlikely that it is the fault of any one thing. It is most probably a commination of several unique to each culture, home or child. All of the explanations are possible and could show the reasons for underachievement, but other are reasons for and against each one. Therefore is better to look at each one with caution. It has to be said that not all of the West Indian and Asian children in the education system are failing. Many are performing well and achieving more than people from the dominant culture. It is just that most are underachieving compared to white middle class students. ...read more.