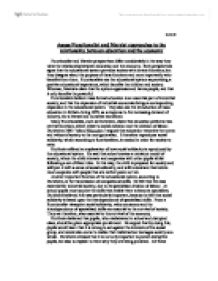 G.D.H Assess Functionalist and Marxist approaches to the relationship between education and the economy Functionalist and Marxist perspectives differ considerably in the way they view the relationship between education and the economy. Both perspectives agree that the educational system provides society with certain functions, but they disagree about the purpose of these functions and more importantly who benefits from them. Functionalists see the educational system as providing a positive educational experience, which benefits the children and society. Whereas, Marxists claim that the system oppresses and harms people, and that it only benefits the powerful. Functionalists believe mass formal education is an essential part of industrial society, and that the expansion of industrial economies brings a corresponding expansion in the educational system. They also see the introduction of mass education in Britain during 1870, as a response to the increasing demand of industry, for a literate and numerate workforce. Many Functionalists, such as Durkheim, claim that education performs two central functions, which relate to social cohesion and the division of labour. Durkheim (1961 'Moral Education') argued that education transmits the norms and values of society to the next generation. It therefore reproduces social solidarity, which according to functionalism, is needed in order for society to exist. Durkheim offered an explanation of how social solidarity is reproduced by the educational system. He said that school creates a miniature model of society, where the child interacts and cooperates with other pupils whilst following a set of fixed rules. ...read more.

Post modernists have argued that in a fragmented and multi-cultural society, different groups have different values. Therefore, how can the educational system succeed in transmitting the values of society as a whole? Both Durkheim and Parsons have been criticised, particularly by Marxists, who have argued that the values of school and the purpose of job training, may not reflect the needs of society, but the interests of a ruling class. There have also been arguments about whether schools are meritocratic, some have suggested that the educational system largely reflects and transmits the inequalities of society. Davis and Moore's argument about role allocation has been criticised. Research has indicated that the relationship between academic qualifications and occupational status is weak. It has been argued that other factors, such as class, race and gender may play a bigger part in determining occupational status. It has also been suggested that even academic attainment itself, is affected by the pupils' class, race and gender. Some sociologists also believe that intelligence has little effect upon academic attainment. The Marxist approach to the relationship between education and the economy, places emphasis on the part the schools play in preparing children for their future working roles, in terms of both skills and values. Marxism sees the educational system as an ideological state apparatus, which is used by the ruling class to transmit their capitalist values, in order to protect their own interests. ...read more.

Richard Scase (1977 'Industrial Society: Class, Cleavage and Control') interviewed a sample of English workers, and found that only 2.5% of them felt that educational qualifications were an important factor in determining social class. The rest of the sample felt that family background and economic factors were more important. This would suggest that education has not succeeded in legitimating inequality. Reynolds criticised Bowles and Gintis for not adequately explaining how the economy shapes the educational system. He argued that it is impossible for the capitalist state to exercise complex control over schools, because local authorities and teachers have a considerable amount of freedom and independence in the way schools are organised. Bowles and Gintis's argument about the ruling class manipulating the educational system relies at the most basic level, on some sort of conspiracy between employers and teachers. To conclude, the Functionalist perspective views education as a vital part of society, which turns pupils into model citizens and has a positive impact on the economy and society as a whole. Education also produces a diverse workforce, in a way that is fair to everyone, and it compliments the requirements of the economy perfectly. The Marxist perspective views education as a part of society that is vital for the ruling class, because it reproduces the unequal distribution of wealth and power, by turning working class pupils into conformist workers. It therefore sees education as an ideological tool, used by the upper classes to exploit the working classes. Ref: Haralambos and Holburn (2000) Sociology: Themes and Perspectives (fifth edition) ...read more.