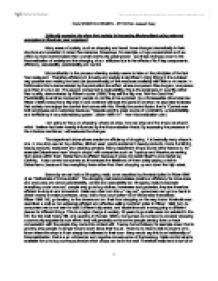 Critically examine the view that society is becoming Mcdonalized using relevant examples to illustrate your argument Many areas of society, such as shopping and travel, have changed dramatically in their structure

Critically examine the view that society is becoming Mcdonalized using relevant examples to illustrate your argument Many areas of society, such as shopping and travel, have changed dramatically in their structure and operation in recent few decades. Nowadays, for example, a huge supermarket such as ASDA is more commonplace than a small community greengrocer. I put these changes down to the Mcdonalization of society and the changing of our attitudes due to the effects of its 4 key components; efficiency, calculability, predictability and control. Mcdonalization is the process whereby society seems to take on the principles of the fast food restaurant. Therefore efficiency in industry and society is significant, doing things in the quickest way possible and making the best use (economically) of the resources availably with little or no waste. In McDonalds this is demonstrated by the production line effect, where one person fries burgers, one person puts them in a bun etc. The second component is Calculability, this is the emphasis on quantity rather than quality, demonstrated by Ritzer's quote (1996) "they sell the Big mac..Not the Good Mac". Predictability is another component; people do not like to be surprised, by unforeseeable circumstances. Ritzer (1996) notes that a Big Mac in one continent will taste the same in another, he also later indicates that society now enjoys the comfort that comes with this. ...read more.

Malls are also "free" from "extreme" shops such as weapon shops or sex shops so the type of stores available are predictable too. A shopper described that "No matter whatever the weather is outside it's always the same in here" (From Kowinski cited in Ritzer;1996;94). People do not want to come cross unexpected circumstances, malls in general look the same, contain the same, have a comfortable climate, flat surfaces, low crime and are away from the perils of bad weather. The same way a McDonalds will have the same lay out, same operating system, same menu and same uniform all over the world. Calculability in shopping is shown by the fact that people now want to buy more than ever before; this is demonstrated by the huge increase in the use of credit cards and mounting debts. "In 2003 we spent �108 billion on cards and by 2007 it is expected to rise to around �154 billion. The number of cards in issue has risen by nearly two-thirds in the past four years so has the level of debt."(http://uk.biz.yahoo.com/dealwithdebt/nationaldebt.html). We want more, we seem to be no longer satisfied with one good or what we can afford, we want 2 or 3 or 4 goods, we want the biggest, the best, the most value, we want the "Go large! ...read more.

Local shops such as greengrocers in small villages are also relied on by the local community for amenities and do genuinely provide a local shopping community where the newsagent will know its customers. I would say that society has and is becoming more Mcdonalized. However as long as there is need or a niche for other markets they will exist and I don't think society will ever become wholly Mcdonalized but the evidence above shows how it has considerable altered. Unless you have a particular passion or are able to afford other options, you are likely to have been Mcdonalized through society. Most of us do want the quick, cheap, easy option and therefore as Ritzers text says Mcdonalization reaches further and wider than you imagine. Additionally we can note that technology, the internet and cheap travel have significantly opened up our options to the world, allowing us to experience foods, cultures, products and markets that 50 years ago would have been alien. Yet despite the new options available to us, we in fact want the complete opposite. People do not take advantage of the new, diverse, strange, possibly expensive, superior, unanticipated and ungovernable goods and experiences open to them because all we want efficiency, predictability, calculability and control. Biblography http://news.bbc.co.uk/1/hi/technology/4091681.stm www.mcdonalization.com www.mcdonalds.com www.screenselect.co.uk http://www.skedaddle.co.uk/p2p.asp http://uk.biz.yahoo.com/dealwithdebt/nationaldebt.html Ritzer, George, (1996), The McDonaldization of Society, Pine Forge Press, California USA ?? ?? ?? ?? Claire WORSFOLD 00548952 - SY1910 Non Assessed Essay 1 ...read more.