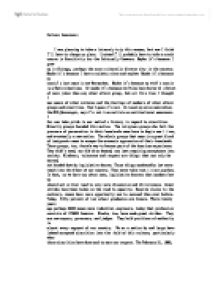 Culture Awareness I was planning to take a leisurely trip this summer, but now I think I'll have to change my plans. Instead I'll probably have to take a crash course in Sensitivity for the Culturally Unaware. Maybe it's because I grew up in Chicago, perhaps the most culturally diverse city in the country. Maybe it's because I have a mulatto niece and nephew. Maybe it's because my cousin's last name is now Hernandez. Maybe it's because my wife's cousin is a Native American. Or maybe it's because we Poles have borne the brunt of more jokes than any other ethnic group, but all this time I thought I was aware of other cultures and the feelings of members of other ethnic groups and minorities. Now I guess I'm not. At least my union newsletter, the BEA_Messenger, says I'm not in an article on multicultural awareness. I for one take pride in our nation's history in regard to minorities. Minority groups founded this nation. The religious groups who felt the pressure of persecution in their homelands came here to begin new lives, and eventually a new nation. The ethnic groups that came in a great flood of immigrants came to escape the economic oppression of their homelands. Those groups, too, found a way to become part of the American experience. They didn't need, nor did they demand, any laws requiring acceptance into society. ...read more.

Yes, I do become "impatient with elderly people who drive more slowly" than I do. But, it's not because they are elderly. It's because I don't want to wreck the front end of my car by running into back end of a car that is going 35 mph on an interstate highway. After drunk driving, the majority of auto accidents are caused by drivers going under the posted speed limits. I do not, however, become impatient with elderly people who "stow their change before moving from the check-out counter." They're not stowing their change. The experience of their years has taught them that half the cashiers in the country don't know how to make change, and they're just making sure they don't get gypped. I now have to suspect the wisdom of saying certain things, according to the Messenger. Saying of my son, "He's all boy," is wrong now. So, too, is saying that he and his friends are "acting like a bunch of savages." So I can't tell them to "sit Indian style" for a while and behave themselves. I don't understand this at all. I certainly don't want an hermaphrodite for a son. But if he was, I still wouldn't want him acting like a savage when we are supposedly civilized. As for the act of sitting on the floor cross-legged, which is not to be confused with the sitting position of meditation known as the Lotus position, I can think of no other way to say it other than Indian style. ...read more.

It's just as silly as the other points made in the article. Nobody in their right mind wants anybody living next door to them. All of us would probably prefer that our nearest neighbors were forty miles away and the only way they could contact us was by dog sled. Since we can't have that ideal, we settle for anybody who can kill dandelions and cuts their grass on a regular basis. We would also require that they keep their dog from pooping in our yard. We would like them to do the same things with their kids, not have a lot of large, loud parties, and not have the cops pull up in front of their house every other night. Most of us have never given much thought to the question, but when we do, we decide we don't give a hoot. I don't presume to know about other cultures. My perceptions of other cultures can only be based on experience. That is why I plan on attending that Summer Camp for the Culturally Unaware. I do have one condition to place upon my attendance at this camp. Whoever is running the camp, perhaps even the person who wrote the Messenger piece. has to attend a camp that I am starting down the road from them. It's called Summer Camp for the Multiculturally Without a Clue. Every night we have czardnina and hot dogs for supper. Then we sit Indian style around a campfire. Boys and girls are welcome regardless of race, religion or creed. ...read more.